Yesterday we looked at manriding accidents.  Today we are drawing your attention to HSE (Health and Safety Executive) recommendations arising from the Silverwood and Bentley fatal accidents and other analysis arising from the more widespread introduction of Underground Locomotive Haulage into coal mines following the 2nd World War.

In 1991 the HSE published its report containing its conclusions and recommendations, following its analysis of deaths and reportable accidents, 1947 to 1967, due to all mechanical haulage activity against the number of locomotives in use.

This is a chart showing Underground Haulage statistics 1947 to 1967. 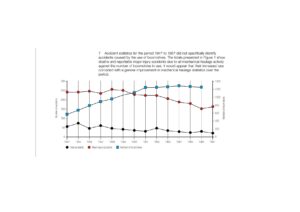 The 1991 HSE Report was the first major review of the use of locomotives as a system of transport underground since in  1986 the Reporting of Injuries, Diseases and Dangerous Occurrences Regulations (RIDDOR) came into effect and certain incidents involving underground mining locomotives became reportable for the first time. This followed the Silverwood Fatal Accident in 1966 and the Bentley Fatal Accident in 1978.  At Silverwood, 10 men died and 1 was serious injured and at Bentley 7 men died and 3 were seriously injured).

Following the reports and analyses arising from the Silverwood and Bentley serious accidents the HSE concluded that:

“Potential for such disasters exist where locomotive systems are designed and operated without adequate margins of safety.”

Moreover, following their analysis of incidents occurring between 1968 and 1987/8, they further concluded that:

The 1991 Report contains conclusions and recommendations to improve safety and reduce accidents.

You will find further information and the full report here: