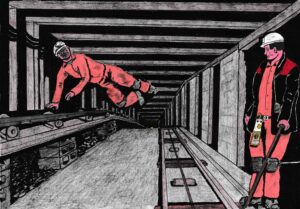 Sneaking out of Pit on Cable Drift Belt. Getting to the top and finding the Overman waiting. One hour’s pay stopped.

This drawing by Brian Morley, Mining Artist*, shows the other side of pit life.  When familiarity with the ever present dangers can lead to corners being cut and dangers being ignored.

These are some of the stories we have been told.  Time has passed, so we will give full names as no come back is likely!

“As a young man at Cossell pit 16 years old, nearly everyone rode out of the pit on the belts lying flat out facing the way of travel. Cossell was a drift mine so no headstocks or shafts just belts going right out to the pit top. I remember one man never rode the belts, he was about 6′ 4” tall and he walk out every day. Being young and with my mates we thought it good fun to throw peices of coal at his back as we were riding past him on the belt, one day I was the last man in our group riding out on the belts and we came across big Mal, my mates all started throwing coal at Mal as they rode by him, he suddenly turned round as I was passing him and he grab my legs and held onto me while the belt was still in motion and with coal on it rubbing my whole body it seemed a bloody long time before he let go, it taught me a lesson and I never threw coal at Big Mal again.”

Eric, also provided us with this summary of some of the potential dangers (falling asleep on manriding belts is just one), uncomfortable experiences and rules to be followed by miners travelling to and from the coal face on manriding belts and in Paddy Trains:

“Belt riding, no man riding on any belts that delivered into a bunker.

Getting off and on the manriding belt, you must use the getting on and off platforms, you must lie flat facing the way of travel. this is for riding outby.  Bottom manriding belts riding inby same rules apply.

All manriding belts had a green cable throughout their length and connecting the green cable would be lockout boxes every 20/30 metres, any problems on the belt you pulled the green cable which put a lockout in and stopped the belt. There was a downside to this as you were traveling on the belt if you wanted to stop it with the green cable, it would slipping through you hands causing friction so burning your hand.

Paddy riding, some carriages were that small when you had six men sitting in them facing each other, you had to have the oppsite man with his leg between yours, if you were the one sitting on the end your leg would be against the side of the carrage, by the time you arrived inbye your leg would feel as if it was cut in half so if possible you lifted your leg up and rested it on the side.” 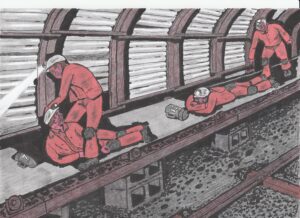 This drawing by Brian Morley also illustrates the problems and dangers at the end of the shift when the miners were desperate to get back to the surface.  Brian says, “Us young and daft ones, walking the belts at the end of the shift.  Always a rush to be first to pit bottom.  A lot of cussing when walking over older and more sensible men.  You had to be careful not to tread on someone’s hand.  It did happen.”

“I remember when the Paddy pulled into the station at the end of the shift everyone including the driver, used to jump off the train before it stopped and run like hell into the pit bottom to get on the first draw up the pit
I remember the pit bottom deputy, someone we all hated, tried to stop us running.  He was trampled!  He had boot marks all over him he didn’t try that again.”

This picture of Brian shows the congestion at the Pit Bottom: 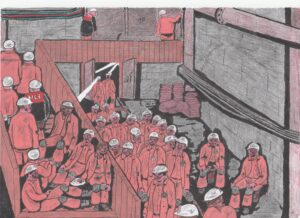 *We hope to have Brian’s postcards and his Exhibition Catalogue, containing 70 of his drawings, on sale soon.  Brian Morley’s drawings are a unique and unequalled record of the many, many, often dangerous aspects of the work of coal miners.