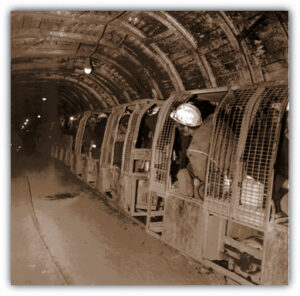 Inevitably when transporting large numbers of men over long distances underground, from time to time, accidents occurred.  There were occasions when there were serious injuries and fatalities.

In Nottinghamshire, Bob Bradley on the Healey Heroes sites records an accident at Blidworth Colliery on the 2nd March 1952 when Albert Roscoe Wood, aged 53, lost his life in a manriding accident.  The report does not state whether this occurred on a manriding conveyor or Paddy Train.

Another serious accident occurred at Thoresby Colliery, on the 6th March 1991 again as reported by Bob Bradley in Healey’s Heroes.

David Coleman the man injured described the incident to Bob.

“I was badly injured when a run-away mine car travelled down a slope and struck a paddy train travelling uphill. The first two cars were completely demolished and the third car in which I was travelling was almost squashed flat.  I sustained a broken skull, eight broken ribs, a collapsed right lung being penetrated by a rib, a smashed hip and dislocated left leg. For six months my left arm was paralysed and I was also partially blinded. However I recovered from my injuries after many weeks in hospital.  I never went down the mine again.”

A much more serious incident occurred at Bentley Colliery in South Yorkshire on the night shift of Monday 20th November, 1978, which resulted in 7 fatalities. 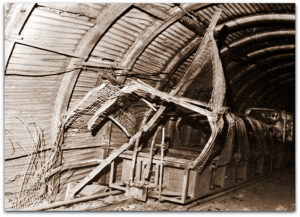 The Report states, “At the scene of the accident men were pinned between the last three carriages and the roadside. Carriages 2, 3 and 4 were disconnected from each other and slid over in order to release the men.”
Night shift senior overman, R. McGuire, who was already at the surface, went down accompanied by a doctor and a nursing sister. They travelled inbye on a quickly assembled manriding train who was later used to transport the stretcher cases while those who were able walked out to the pit bottom.
All the injured men were brought to the surface within two hours and 18 men sent to hospital for further medical treatment of whom four were temporarily detained. A further 40 were treated for shock at the colliery medical centre. The seven who died were brought to the surface by 9 a.m.

See also this report of a fatal accident at Silverwood Colliery where 10 died and 29 were injured.