Manriding – Paddy In, Belts Out

“Paddy In, Belts Out”

Taking inspiration from this postcard of Brian’s (Brian Morley, Mining Artist – Brian’s postcards will be on sale again when the Museum reopens), we are featuring Manriding in our blogs this week.  Over the week, we will look in more detail at Manriding in pits in Nottinghamshire, including accidents and HSE reports.  We’ll also feature some of the stories we’ve heard about ‘riding’ on either the ‘paddy’ or belts. 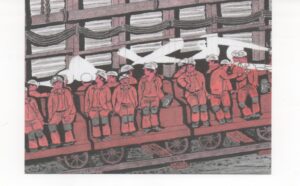 Brian’s commentary on this picture is:  “The Paddy or Man Rider:  At our pit, Moorgreen, South Notts, it was Paddy in and belts out.”

The ‘Paddy’ was a Paddy Train.  It was a workman’s train and was used for transporting miners in and out of the mine.  For those of us who have never seen a Paddy Train this is a clip from the National Coal Mining Museum

“Belts out” means the men were returning to the pit bottom on a man riding conveyor, like the one Brian has drawn in his picture.

Before ‘manriding’ and ‘paddy trains’ were introduced miners would walk many miles to their coal face, before they started their work.  This early clip from 1950s at Hilton Main, is worth watching for many reasons as it features film of mining in the early years of Nationalisation.  It shows the men walking in and out from their work on the coal face and images of the Paddy Trains that were being introduced (from 21 minutes into film).

This picture from 13 July 1977 shows a two-way manriding conveyor at Ollerton Colliery. 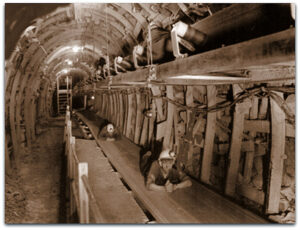 Picture taken on visit of Sir Derek Ezra to Ollerton Colliery, 13 July 1977.  Thanks to Healey Heroes and Bob Bradley for this photo.

Can you help with an answer to this question.

When were Paddy Trains first introduced in Nottinghamshire pits and at which pit(s)?

ALSO – do you have any belt or paddy train experiences to share?