Barrie, a miner at Linby recollects his time at the pit:

“By the time I entered the mining industry horses had just about moved on at nearly all the collieries.   I started Linby in 1974, there was no ponies but there was plenty of banter from the men who had worked with them, how they had rode them to pit bottom or elsewhere about the mine.  They was there to perform a task which must have been terrible at the time. 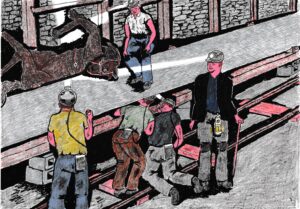 Brian Morley recollects this accident in the 1950s when a belt started up and a pony got trapped. The belt had to be broken and the pans taken out to get the pony free.

“Ponies were eventually replaced with rope haulage systems. Which at times they could kick back if they were not treated right.  Roadways with hollows had to have holding down rollers these could be nasty if not treated right.  Common sense was not always the order of the day. 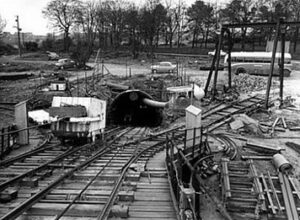 A Rope Haulage System with a rope roller in the foreground.

There was so much to pay attention to.  Warwicks were girders going from floor to roof and there be one at each end of the danger area to prevent ‘runners’ from achieving any distance.

“Ropes played a big part in modern mining  they lowered men into the pit, they were also used in man riding and then of course to convey material to the districts. 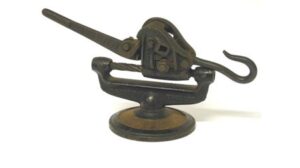