HAULAGE – THE USE OF PONIES IN A COAL MINE

A blog inspired by the drawings of Brian Morley, Mining Artist 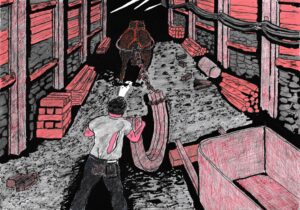 A term we used at the pit: inbye means going to the coalface

Outbye means going out towards the surface or pit bottom.

“One of the jobs I did at Cossall Colliery was ganging a Pony. Unfortunately I only did it for around ten months as my name came to the top of the list for face Training.

As Cossall was a drift mine we walked in and rode the belts out, also the stables for the ponies were on the surface, so you would collect your pony (mine was called Captain, you always tried to take him something like a  carrot or piece of fruit, if nothing else some fresh grass) and put his tackle on in the stables and walk with him down the drift and into the mine to your place of work.

After arriving to your place of work you would attach the limmers to the tackle on the pony and load up your rings, board’s struts, cleats and wood nogs, into a tub, you then coupled the pony up to the tub with the crank and off you would go up the gate to the coal face; we weren’t allowed to ride on the tubs or the pony, you had to walk in front of the pony holding a short rein.

On arriving at the end of the rails near the coal face, you would uncouple the pony, turn him round and walk him by the tubs ready to dog him on to go outby. (If you had been on the job with the same pony he would know what to do, so as soon as you uncoupled him from the tubs he would turn around on his own and walk past the tubs himself ready to go outby to fetch more supplies.) If there were no supplies at the end of the gate you would have to wait for the haulage lads to bring you some on the rope haulage.

If there was a breakdown on the coalface and they needed a heavy piece of equipment we sometimes coupled up two ponies to take the items to the coalface.

At the end of your shift you would take the limmers off the pony and make your way out of the mine, some belts were man-riding belts and some weren’t. All the ones on the main roads were man-riding belts so you would get on the main belts holding the rein (no getting on and off platforms in those days) with your pony trotting at the side. There were as far as I can remember, about eight main belts and it took a good twenty minutes to half an hour to get to the surface.  In Winter it would be freezing as you would be going against the travel of air.

As you would be riding out with your pony trotting at the side of the belt the afternoon shift would be walking down the drift so you would shout to them “Pony” and the men would stand to one side and let the pony go by them. If you were dozing and you didn’t realise men were there then sometimes the pony would knock a man over and you wouldn’t be very popular; you were lucky then to get away with a few expletives or a clip round the ear.

While I was doing my face training on the supply gate lip, the Deputy came to us and asked us to go down the gate and give the ‘ganger’ a lift with a tub that had come off the rails.  So we went down and found the tub and pony, but at first we couldn’t see the ganger, the roof was low at this point in the gate and there wasn’t much room over the top of the tub.  Yes you’ve guessed it, the ganger was illegally riding in the tub and couldn’t get out because there wasn’t enough room between the roof and the top of the tub.  We lifted the tub back on the rails and sent him on his way, I don’t remember if he got fined but I bet he didn’t ride in the tub again!” 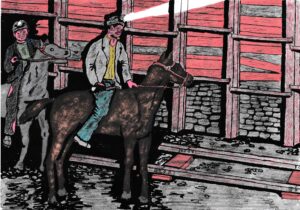