What Replaced the Ponies?

After the ponies were taken out of the pits in the early 1970s.

Most of ponies were taken out of the pits in the early 70s’ as it was deemed cruel to keep them underground.

This caused the Pit  Managers to throw their hands up in the air and despair as to what they were going to replace them with. They were allowed to keep two ponies at each pit for a short time while they adjusted to the problems they had with the ponies being taken out.

In some respects they had already started to engineer the problem out, they still had the endless and tail rope haulages, and small diesel trains to start with.

Rope Haulage in a coal mine; note the bell wires in the roof 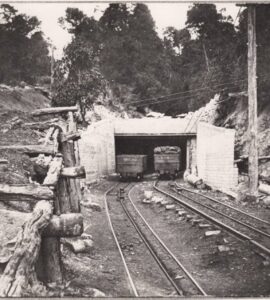 Rope haulage in a drift mine 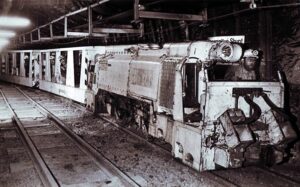 When the diesel trains had gone as far inbye as they could with materials then it used to be the ponies that took the materials up to the coal face, but now they had gone, rope haulages had to take over, these ropes were made of steel and were extremely strong.  It was difficult, as it was a big job to keep extending the rope, most of them were what we called “endless rope haulages”; this means the rope would be connected to the haulage engine outbye and put around a wheel at the inbye end. When taking supplies up to the coal face the haulage lads would couple all the tubs together with a special attachment that we called “dogs”.  This was a chain with two hooks on at each end, they would then put the haulage clip in the last tub and clip it onto the rope, they would do the same at the front making sure that all the “dogs” were tightly stretched. They would then “ring off” on the bare wires; these consisted of two wires strung all along the roadway about six inches between them; when you touched the wires together it rang the bell in the engine house, and this is how you would communicate with the engine driver. It would be 4-2 to haul inbye, 4-3-2 to haul outbye; 1 to stop and 3 in an emergency. 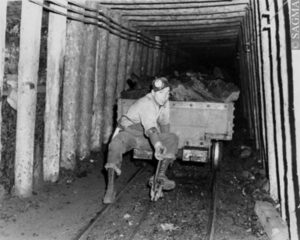 A Tail Rope, this was just a single rope used mainly on inclines, again is was made of steel and was used in the same way as the endless rope was, with the difference that tubs were hooked on the last tub and lowered down the incline.