MEET OUR VERY OWN ANN DONLAN!

Ann Donlan is our volunteer and director, who puts a lot of time and energy into our museum. You can read more about Ann here. Ann kindly agreed to write her own experiences of working as a short hand typist for the National Coal Board between 1965 and 1971, to be featured as a blog post. Ann has supplied some lovely photographs too! Thank you Ann.

Here are some photographs, from Ann’s time at the International Young Trade Unions Conference of 1968. 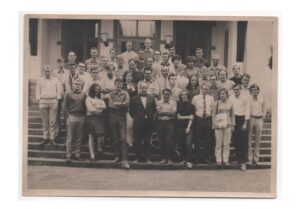 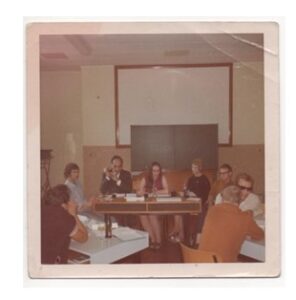 I have many happy memories of my time working at the pit.

When I was 17, I started work as a Shorthand Typist in the Manager’s Office at Blidworth Colliery on the29th June 1965.  David Rodden was the Colliery Manager.  I typed letters and reports and occasionally took minutes at Consultative and Safety Committee Meetings.

My standout memory from that time were the mugs of milky coffee and hot beef dripping toast delivered from the Canteen. The NUM Officials would come into the office on a regular basis to discuss matters with the Manager. They were always very friendly.  I remember the NUM delegate at the time was Bernard Savage.

I moved to Clipstone Colliery on the 2nd January 1967, and worked in the Training Office, firstly for Russ Langrick, until he retired and then Dick Purdy and I also did clerical work for the Safety Officer, Sam Smith.   My job in the training office was completing the training records. The NUM officials at the time, who would occasionally pop their head round the door, were Frank Haynes (who later became the MP for Ashfield), Jim Dowen and Sam Dunlop.

My standout memory from my time in the Training Office is that the office was beneath the Pit Hooter, which called the men in the village to the pit for their shift.  The first few times I heard it, I jumped out of my skin.  After a while I couldn’t have told you whether it had gone off or not!

I then transferred to the Manager’s Office.  The Manager then was Mr White, who I recollect suffered from shingles.  My main responsibility was taking minutes at Consultative and Health and Safety Meetings.  Another very important task, on the hour, was to go into the telephonists office (they were all men, former miners who had been injured) and collect the production book which was completed and constantly updated by the telephonists.  This had up to the minute reports from down the pit, on the coal produced and any hold ups on particular faces.  In a way, this was my most important job, and I was in trouble if I forgot to do it on the hour!

At that time everyone at the pit was in the Union, the NUM (National Union of Mineworkers).  I was in NUM (COSA) which was the union for the clerical staff.

On the 12th September, 1970,  I was married and I remember being presented with a very fine tea service as a wedding present from my colleagues.

I left Clipstone and the NCB in late 1971 due to ill health.

I have many happy memories of my time working at the pit.