Briefly touched on in the first blog, there was a huge workforce of women in the mining community, as wives and daughters of miners, would often work in local factories. That was certainly the case in Nottingham. There was an undeniable solidarity between these workers, as team member and volunteer, Barry Donlan recalls.

Barry talks fondly about the women that he worked with during the 1970s and noted how many were also part of a Union. Women were a key part of the Trade Union movement and Barry explained that all but 2 of the female workers were part of the Union. Barry stated how ‘there were 9,500 members and 7,000 were women’, therefore you can see just how strong and solid the women’s workforce was.

Although many may feel Hosiery and other factory work differs from the mines, there is clearly a link to be made, as this remains a key part of our working-class, ex-mining community’s history.

You can read more from Nottinghamshire Live, regarding Nottingham’s working-class past and the decline of industry. Read here

When speaking with Barry, he spoke passionately about his time at the Hosiery Factory and told me about the strikes that were had, as the workforce was predominantly solid in their numbers. Many strikes were orchestrated by women workers, from their involvement with the Trade Unions and their growing interest in better pay and working conditions. As you can see, there are many similarities with the Miners.

Thanks to Our Mansfield & Area, there’s some great pics available from the textile industry here! Just like this one below. 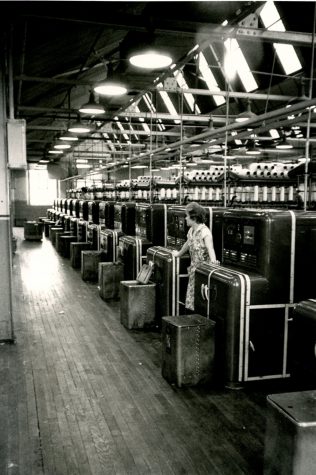 Through research into this theme, I found a striking image (pardon the pun) of Hosiery workers here in Nottingham.

The strike at Mansfield Hosiery Mills in November-December 1972, involving male and female Asian workers, was a struggle which exposed not only the racialism of the National Union of Hosiery and Knitwear Workers and the management, but also showed the roles played by the Race Relations Board, the Loughborough Community Relations Council, and the Runnymede Trust, who ‘are moving to find a new lease of life in the mediating machinery within industry and therefore present an image of management with a liberal face’. (SOURCE)

Do you have any stories of working at a local factory? Any pics to share?

For tomorrow’s blog, Barry’s wife Ann (one of our Directors and a hard working volunteer) will be sharing some memories of her time at NCB. Thank you Barry, for sharing your experiences with us, and giving us the foundations to construct today’s blog and share this local part of history with our readers.