From Pitman to Mining Artist 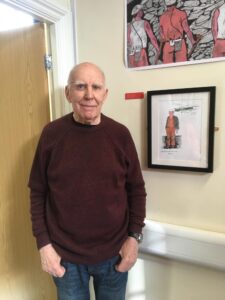 Born in Nottingham on January 30th, 1937, Brian started at Linby Colliery aged 16 and worked in the pit bottom.

Brian went in the Army for 3 years in 1957.  When he came out of the Army he started at Moorgreen Pit;  his job was ‘ganging’ a pony.  He did his face training in 1960 and after he finished his training his jobs included; ripping, heading and the cutting team.  Stable hole was his first job.

When Moorgreen closed in 1985, Brian moved to Hucknall pit.  The coalface he was working on hit a white wall.  Hucknall closed in 1986.

Brian was made redundant in January 1986 at the age of 50 and never worked again.

Years later, Brian began drawing, he had pens in the house for his grandchildren and he had a drawing book.  Brian’s grandchildren asked him about his work as a coalminer and Brian found the best way to explain was to draw pictures for them.  He found he was able to draw scenes he could remember from the pit and capture them in his drawings;  He was surprised how well he could draw.

In the Exhibition, Brian’s drawings were accompanied by artefacts from the Museum’s collection.

A number of Mansfield Schools visited the Exhibition and with the assistance of a retired teacher and local artist, the children were encouraged to make their own drawings, using Brian’s pictures as inspiration.  The idea was to develop the children’s confidence in their own ability to draw.

The Exhibition was also accompanied by talks from ex and retired miners, who volunteer at the museum, and they were able to further inspire the children with their descriptions of life ‘down the pit’.  The volunteers also encouraged the children to research their own family’s connections to coal mining.

Copies of the postcards, drawings and the Brian Morley Mining Artist Limited Edition Exhibition Catalogue will be available for sale, after the lockdown.  Currently our volunteers, who are all ex miners and vulnerable to Covid, are unable to arrange for despatch of items bought directly from our own Shop.