“I am a tunneller, I must look after the others first”.
Sapper William Hackett VC, 254th Tunnelling Company, June 1916. 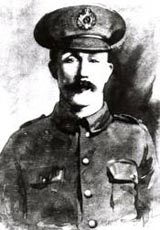 When we hold our two minutes silence at 11.00am today, we will all take this opportunity to recognise the bravery of everyone who fought for their country.

We at the Nottinghamshire Mining Museum, will also honour all of the brave miners, who fought in both wars or stayed working in the mines so the country could continue on.

Today, we want to remember the tunnellers from Nottinghamshire, one of whom was Sapper William Hackett who was awarded the Victoria Cross.

On the 22nd June 1916, Sapper William Hackett and four of his tunnelling team were tunnelling towards the German trenches, when an explosion collapsed their tunnel. The five men were cut off from their exit shaft for two days, until an escape hole was finally made. William Hackett helped get three of his fellow tunnellers out to safety. Although the escape hole was looking extremely unsafe, William refused to take advantage and escape, whilst one of his fellow tunnellers remained trapped. When he was asked to come out of the tunnel, his response was  “I am a tunneller, I must look after the others first”, and he went back into the tunnel to try and rescue Thomas Collins.

Even though the rescuers worked to try and save both men, the continuous bombing and shelling collapsed the tunnel and there was no way to reach William Hackett or Thomas Collins. Both men died together under the Givenchy sector of Northern France.

William Hackett, a 42 year old illiterate miner with a heart condition, reminds us, that even when surrounded by death and destruction, and feeling fear, anger and worry, an individual can become the best of humanity, through acts of bravery, inspired by their unselfish concern for others.

Before you go, the Nottinghamshire Mining Museum is a charity run by a group of volunteers and we need help to find a permanent home for the museum and to create a virtual reality experience for visitors, if you can we would be grateful if you would make a donation via our Go Fund Me page.