Clay-Kicking or Working the Cross

How many of our miners have heard of ‘clay-kicking’ or ‘ working on the cross’?

One of the main advantages the British tunnellers had was the use of the technique called ‘clay-kicking’.

Clay-kicking was a lot quieter than normal mining methods and silence could mean the difference between life or death for a tunneller. Tunnellers had to be continuously listening out for other tunnelling operations from the opposing side, so the quieter a tunnelling team could be, the less likely they were to be discovered.
Clay-kicking was also four times faster in the firm clay conditions on the Western front, than any other form of mining. This made the British tunnellers far more efficient than the Germans.

Clay-kicking was a well known technique used in England for digging out sewers, railway tunnels and roads. It was specifically developed for tunnelling through clay, so that made it ideal for the blue clay facing the tunnellers in France. 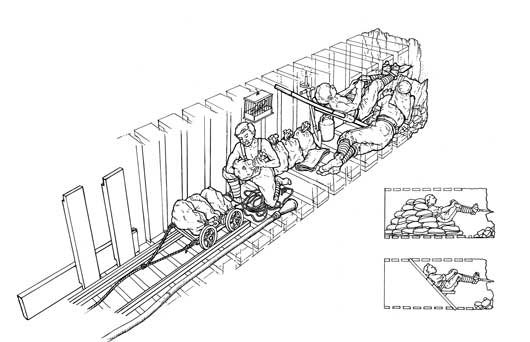 It involved one miner, ‘the kicker’, being supported and using his feet to pierce the clay with sharp spade called a ‘grafting spade’ so it was more or less cut out. Another miner, the ‘bagger’, would bag up the clay and pass it to the third miner,’ the trammer’, who would transfer the clay back to the entrance via a trolley. The men did rotate the work during their shift, probably due to the physical demands of the work.
Once a team had formed they worked very closely together and stayed together. They worked 6 hour shifts, during which they could be shelled and have their tunnel collapsed, if they were discovered. To reduce the chances of discovery they didn’t use nails or screws to hold the supporting timbers together, they relied on the natural swelling of the clay to keep them in place.

The Germans never used ‘clay-kicking’, they were not aware of the technique.

Before you go, the Nottinghamshire Mining Museum is a charity run by a group of volunteers and we need help to find a permanent home for the museum and to create a virtual reality experience for visitors, if you can we would be grateful if you would make a donation via our Go Fund Me page.