The role of miners during World War 1

If like many of us you too have been fans of the recent TV programme Peaky Blinders, you will have seen Arthur and Tommy having nightmares and flashbacks of their wartime experience. 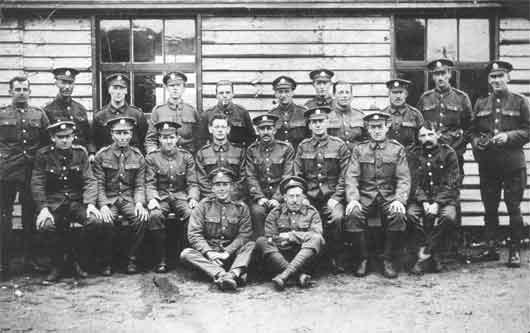 A section of 175 Tunnelling Company. Courtesy of Spellmount Books and The Tunneller’s Memorial Givenchy

During WW1 both characters were ‘Moles’ or tunnellers. Although Tommy and Arthur came from Birmingham, during the war miners were recruited from all over the country, they were claimed from other regiments such as the infantry on request from the engineering corp, or they enlisted, having seen advertisements, calling for experienced miners to join the war effort and miners from Nottinghamshire did sign up to be tunnellers.

The Engineering Corp especially wanted the older miners, because they had a greater experience in mining, they were physically fit and able to do the strenuous work and they already had the sense of camaraderie that was necessary when working underground. They knew their lives depended on each other, this was something that couldn’t be taught. A few of the miners that signed up were over the cut off age of 45 years old. The pay for a skilled tunneller was 6 shillings a day but only around 10% of tunnellers got this. 90% of the tunnellers were on 2 shillings 2 pence a day and were classed as tunnellers mates. The majority of the 6 shilling tunnellers were ‘clay kickers’ the majority of the hewers were tunnellers mates.

Any miner will know the perils of working underground, the tunnellers working at the Western Front, not only faced the dangers of mining underground but they were in a combat zone and could be blown up at any point. They had to be listening for the German tunnellers, who were also trying to tunnel beneath the Allied Forces so they could detonate explosives beneath them. Many men came back changed from the experience of being a tunneller during WW1.

Before you go, the Nottinghamshire Mining Museum is a charity run by a group of volunteers and we need help to find a permanent home for the museum and to create a virtual reality experience for visitors, if you can we would be grateful if you would make a donation via our Go Fund Me page