This is a drawing of me when I got buried. 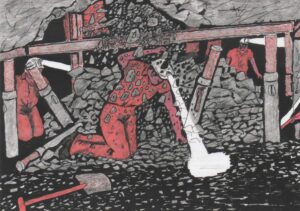 “We had just fired the ripping, got back to lip and found the shots had blown three props out from under Bull bar. I went under the lip and started digging out to reset the props when some of the lip collapsed burying me, all but my head. Luckily was all small stuff, no big stones and the stable hole men were quickly over the pans and got me out, just a few bruises.”  Brian Morley artist.

This is 1 of 6 of Brian’s drawings that have been reproduced as postcards and these will be available to purchase, together with the Exhibition Catalogue,  post Covid 19, when the Museum is safe to open to our volunteers and the public.

Brian was one of the lucky ones. Roof falls very often ended in death or at the very least injury. Very few people outside of the mining communities understood how dangerous mining could be and how the men working in the mine risked their lives in order to provide fuel for the country and a living for their families.
Here is a list of just some of the miners that were injured from roof falls or fall of coal in 1961:
George Shepherd from Langwith, at Langwith Colliery
Fred Johnson from Edwinstowe, at Ollerton Colliery
Martin Kyne from Mansfield Woodhouse, at Sherwood Colliery
Victor Hallam from Clipstone, at Clipstone Colliery
Richard Holton New Ollerton, at Ollerton Colliery
George Lesh, New Ollerton, at Ollerton Colliery
Harry Wilcockson Mansfield Woodhouse, at Clipstone Colliery
Source: http://www.healeyhero.co.uk/rescue/Fatalities/Mans-Hosp/Mans-Hosp-1961.html

There were many other ways that a miner could become injured or worse, even with modern technological advancements and a greater emphasis on safety, mining could never be considered truly safe and many miners owe their safety and lives to their fellow miners. Each one knew they were reliant on each other
Lawrence (Larry) Ferron, who was a miner at Gedling Colliery, gave this account of a roof fall with tragic consequences

” Well, I remember I was on the face at the time, and the roof and everything came down on him. He was on the machine. He should be driving the machine, but he stop and come back to help the guys. And he were going away from them, and they couldn’t catch up with the work, so he came back to help, you know, and the roof came down on him. I can remember that, yeah. I was on the shift, yes, that time and then they took the body out the, out of the pit, like, you know. I didn’t, I didn’t take it out, like, you know, but, you know, just one of those things. I went to the funeral. They cremated him. Yes, I remember, yeah.”