Dreaming of a better tomorrow – Poverty, Health and Ownership in coalmining communities

“…the public was appalled by the contrast revealed during the sessions of the Sankey Commission between the wretched living conditions of the mining families on the one hand and the exorbitant wartime profits and royalties earned by the owners and landlords on the other.” A R Griffin, The Miners of Nottinghamshire, 1914 – 1944.

In the early 20th century the Miners Welfare Fund was the only real enduring outcome of the wave of public and political sympathy following the exposure of the shocking living and working conditions in mining communities in 1919. 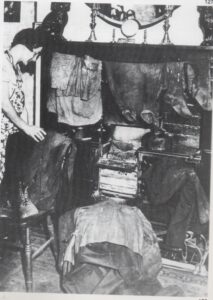 Drying the miner’s working clothes before the introduction of pit head baths. Photo courtesy of ‘ A Century of Struggle, Britain’s Miners in Pictures, 1889 – 1989’ National Union of Mineworkers

The Mining Industry Act of 1920 set up The Miners Welfare Fund, as proposed by the Sankey Commission.  The Fund was financed by levies of 1d. per ton of coal output.  This was devoted to the enhancement of the ‘social, recreational and educational facilities for mineworkers and their families’.  Help with housing was excluded from the Scheme.  In the first 5 years the overwhelming bulk of grants – 64% was devoted to recreational facilities (which included boys clubs) and 31% to health (primarily convalescent homes but also hospitals, nursing and ambulance services.)

In 1926 a permanent levy of 5d. was introduced and the Miners Welfare Fund was tasked with the duty of providing pit head accommodation for bathing and for the drying of clothes.  The P H Baths Building programme continued up to and beyond the 2nd World War.  By 1945 the Fund had built 348 pit head baths 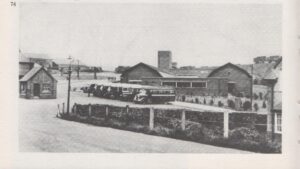 Welbeck Colliery Pit Head Baths, c1920. Photo reproduced with thanks to Mr F Cairns and reproduced in The Nottinghamshire Coalfield, 1881 – 1981, A R Griffin

In Nottinghamshire the creation of The Berry Hill Rehabilitation Centre was an renowned example of the new medical facilities that were created with support from the new Fund.  It was an outstanding facility and provided specialist medical care for the many miners suffering  appalling injuries as a result of their dangerous occupation and the many accidents that occurred in the mines.   It had first been decided on in 1922, when the Miners Welfare Fund of Mansfield Woodhouse joined with the Mansfield Committee project to acquire Berry Hill Hall with its 90 acre grounds for a convalescent home for miners. 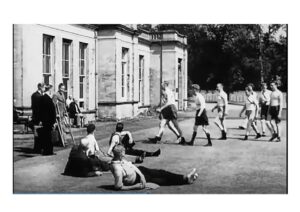 For further details about the Berry Hill Rehabilitation Centre, follow the British Council link to the film and consult The Nottinghamshire Heritage Gateway > Homepage (nottsheritagegateway.org.uk)

Categories: News.
« Dreaming of a Better Tomorrow – With bravery and courage – Notts miners struggled against starvation and hunger and for trade union rights in 19th century Nottinghamshire
Dreaming of a better tomorrow – poverty, health and ownership in mining communities »