Throughout conducting this research, the name Ida Hackett has been flagged up on numerous occasions. As her name has appeared so frequently and with great affection, it is only right that we honour her contribution to the cause and remember her legacy. 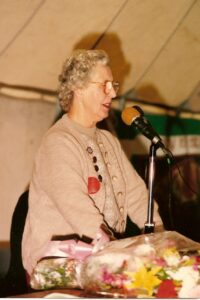 Ida was born in 1914. Her father had been victimised at Warsop Main Colliery in the Strike of 1921, and was out of work for four years as a result. Ida was 11 years old during the Miners’ Strike of 1921 and remembered how families had to survive on soup made from bones from butchers and vegetables from their allotments. She later recalled: “We didn’t have soup kitchens. There were real food kitchens in village halls and schools.”

Ida began working life in 1931 at the co-op, where she joined the Trade Union movement and became a prominent figure. Ida met husband Ernest, in 1939 upon her election to the Mansfield May Day Committee. Ida was known both locally and nationally, and went on to stand as the Mansfield Candidate for the Communist Party. Throughout the late 1960s and early 1970s, Ida was a member of the Party’s Executive Committee. (Source)

Ida Hackett (1914-2012), an indefatigable miner’s daughter from Mansfield, who was always to the fore in any workplace or estate struggle and who was a tower of strength in the 1984-5 miners’ strike. (Morning Star)

In her seventieth year, Ida became involved in the Miners’ Strike which began in 1984. Ida was the Chair of Notts Women Against Pit Closures. She travelled across the country, delivering speeches, in an attempt to gain support and solidarity from far and wide. Ida co-ordinated all of the support groups eg weekly deliveries of £1500 worth of groceries and vegetables from north London to Nottingham. She wrote in the Morning Star to raise money and support and approx. £4000 a week poured in. Her husband Ernest answered phones etc. at home on behalf of Women Against Pit Closures.

Ida features in the touching book ‘Hearts & Minds‘ as she explains how, at first, many men were threatened by women’s sudden involvement in the fight against pit closures, but sums up the solidarity and equality between working-class men and women, in their plight to save the pits…

“It was a new experience for men to see women working in this way, handling enormous amounts of money, speaking about the strike to huge audiences all over Britain and overseas. Of course we listened to their suggestions and comments, but we took responsibility for ourselves, that was what they found so hard to accept at first. In time, they saw how determined we were, and how capable, and they had to listen to us, even sometimes to look to us for help. We had arguments and disagreements, but we got through them and we were on the same side, weren’t we?” (Hearts & Minds, 1986, p. 12)

As one can see, Ida was a formidable woman and a strong advocate for the working-class. In the interview below from our archives, Ida shared with us some of her memories from the Miners’ Strike of 1984-85. 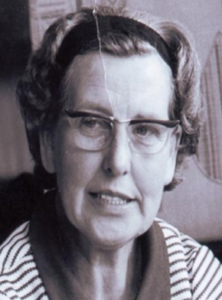 In our records, thanks to Chair Eric Eaton, we have an interview with the late Ida Hackett and we would like to share some highlights here.

“And when people go on strike, I don’t say ‘well… are they doing right?’ They are on strike and they wouldn’t go on strike if they didn’t have something to strike for and I hope that I never forget that.”

“I’ve never, ever in the experience of my life time seen such a wonderful movement, in such a short space of time build over these women. One minute they were housewives… And some worked, wondering the best curtains they could have and everything else. And the next, they were fighting. Doing everything under the sun.”

“This is the calibre of the women. They became county councillors, councillors, they went to university. They did all sorts afterwards. But it was that strike that made them like that… And it made the men say that they were women, a person in their own right and not tailing behind anybody. And that to me — is one of the greatest things in my lifetime.”

[On setting up the network of ‘Women Against Pit Closures’ groups, across Nottinghamshire]

“It snowballed so quick… But then you see, we had 20 groups in the end. We supported some in South Yorkshire and some in South Derbyshire… Apart from our Notts women, we took those in as well… It’s something you can’t describe really. We had a weekly meeting coordinating everything, yet each group had its own autonomy.”

“That Christmas, 1984 — there will never, ever be another Christmas like it… We had gotten that many toys and money and gifts sent… We were the envy of the other areas. Because of the solidarity of stuff coming in.”

“We just had this network going, that — I would phone one person, they would phone ten. And you know, do all that sort of thing. It was really wonderful… This was sustained for a year.”

“We got this phone call from Sandra Taylor [Chair of Welbeck Women’s Action Group], saying the manager of the Pit had taken the kitchen from them because somebody had reported that they had been dancing there at 5 o’clock in the morning. They were too shattered to be dancing at 5 o’clock in the morning. But they closed the kitchen. Nowhere to go. And within two hours, we’d got the biggest demonstration in Welbeck village… And in the end, management had to give the kitchen back.”

[On international solidarity and support]

“The international solidarity for Notts was tremendous… I’ll tell you one  thing that really moved me…. There was a bag of nuts from a woman in India. I can’t explain it. I really can’t. But it was so moving. I thought, I bet this woman can hardly afford to do this herself and she sent us this bag of nuts. That is solidarity. That is something that I think is wonderful… Anyway, I just gabble on don’t I?”

[Ida wanted to add to the interview, before it concluded]

“You win respect for your integrity… I shan’t hang my boots up until I’m incapable of doing it… There’s a tremendous class struggle out there and it’s got to be won. And we’ve got to get socialism in this country or else the workers will always have problems and be down trodden someway or other… The Miners were not defeated, they were betrayed.” 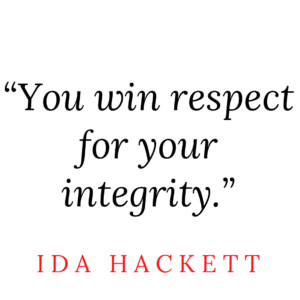 As one can see, Ida was opinionated, funny, straight to the point and an undeniably dedicated activist, who cared deeply about her community. We are so glad that we have this interview with the late Ida, stored in our archives, as we feel that women like Ida Hackett should be remembered for their support of the community and contributions to working-class history. Ida also donated the ‘labour movement sticker collection’ to the Notts NUM Ex and Retired Miners’ Association. This is pictured below. It features as a design in our museum shop, on items such as t-shirts, mugs and bags. 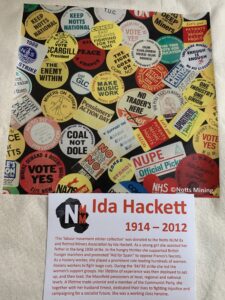 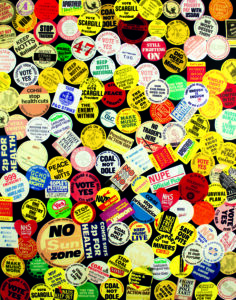