Hello everyone, we do hope that you have been enjoying our blogs so far. A lot of time and effort has gone into this theme, as we feel women are an integral part of the mining community and wanted our blogs to give voice to that. On a personal level, we feel that it is incredible to look back through history, and see women’s continued perseverance, whether it be as workers, homemakers in the community or as front line activists.

As nicely summed up by the quote below, women created a movement of solidarity, in their shared struggle and strength.

Women Against Pit Closures: challenged miners’ and other trade unionists’ assumptions about gender roles, and galvanised a feminist movement that had been dominated by middle-class, educated women. The ideals of feminism – political, economic and social equality and independence – channelled back into the mining communities. The profound impact on the daily lives of women is still being felt 30 years later. (source)

Although women were evidently front and centre of the struggle, and became a force to be reckoned with in their Pit Support Groups: ‘Not all women backed the strike, a small group initiated a Miners’ Wives Back-to-Work Movement.’ (source)

However, the Women’s Support Groups were massively popular in 1984-85 with it being a year long strike, as ‘some of the older women had lived through the 1972 and 1974 strikes, both lasting only weeks, and Sutcliffe-Braithwaite concedes that these were formative. “If those strikes had been longer, there may have been women’s groups in the same way as in 84-85.” (source)

A rhyme from women involved in the 1984-85 strike, as shared in Images of the Past – The Miners’ Strike (Mark Metcalf, Martin Jenkinson, Mark Harvey) can be read below:

We are women, we are strong, we are fighting for our lives

Side by side, with our men, who work the nation’s mines.

United by our struggle, United by the past,

So it’s here we go, here we go for the women of the working class.

What is interesting to note here, is how many women themselves did not consider their movement as feminism, as ‘many would say they were too busy fighting capitalism to have a go at the patriarchy. If researchers asked them if they were class warriors, now that would tell a different tale.’ (source) Although history shows us, that perhaps they achieved both; a resistance to capitalism and the patriarchy, as many of these women later went on to university, trade union roles and even politics. It sounds like these women were certainly at the heart of a socialist uprising, standing as equals to the men, in working-class union and solidarity. Even if many did not realise this at the time. 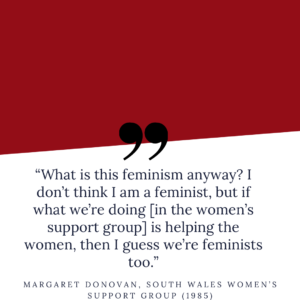