WOMEN IN THE COAL INDUSTRY

March is Women’s History Month and we are ending March by highlighting the role of women in coalmining.

Professor Chris Wrigley in his essay, ‘Women in British Coalmining’, says that whilst the 1842 Parliament Act banned women and children from working underground,

“There was a long history of female labour underground in British mines, and an even longer history of women working in surface jobs.”

Prior to the 1842 Act, women who worked underground would have done this mainly as part of a family group, helping to carry coal to the surface also, says Professor Wrigley they,

“often checked that the family’s coal output was paid for fairly, so acting as a check weigh person.” 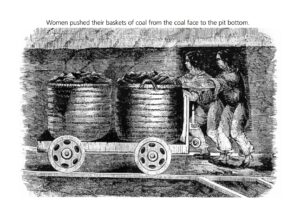 With the banning of women working underground by the 1842 legislation, some of the displaced women joined other women working on the surface, ‘the pit-brow lasses’.  As Professor Angela John in her book, ‘By the Sweat of her Brow‘, has commented, these women

“performed a multitude of different tasks which differed considerably according to geological factors, the size and productive capacity of pits and degrees of modernisation“.

most pit-brow women were young, single and from mining families, with many being the eldest daughter. 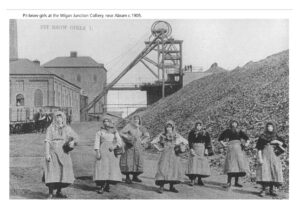 Professor Chris Wrigley, records that, “With the acute labour shortages of the two world wars, there was an economic need for a return of women to the mines, but this seems to have been confined to surface work. In the First World War the Wigan Coal Company employed women to pick waste off conveyor belts and to haul coal tubs on the surface.

In the Second World War several thousand women continued to work on the surface in their traditional areas. Women were still employed on the surface after nationalisation of the coal mines in 1946, but there were fewer of them, only 956 in 1953 and then two-thirds in Lancashire. The increased mechanisation of the conveying of coal with gravity washing methods made redundant most of the work undertaken by women. As pits closed, the last jobs done by women went.

Angela John has pointed to the final women workers at surface jobs in Britain being in 1966 in Lancashire, 1967 in Fife, Scotland and 1972 in Cumberland.25.  Thereafter women working at coal mines were in clerical and similar jobs or cleaners and canteen workers.

However, in the 20th Century women played a central role in many aspects of their coalfield communities, contributing through their work and leisure to the economic strength and cultural vibrancy of coalfield life.  We will, therefore, conclude Women’s History Month by posting a series of photographs that highlight many of these roles.  Look out for these photographs in future posts.