Blidworth Welfare Band, “we started out as the Stanton Hill Temperance Band” 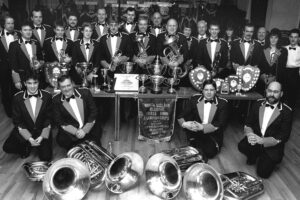 Blidworth Welfare Band is a brass band with a mining heritage.

based in Sutton in Ashfield, the band later changed their name to the Stanton Hill Silver Prize Band until the coal industry paid an interest in brass banding in general.

Over the years we have been supported by various companies, B J Mining, Homefires, local businessman George Aitken, Hopkins Solicitors and we now have an ongoing partnership with A W Lymn Funeral Services, we are extremely grateful for their help and commitment to the band and hope that it may continue.

Blidworth Welfare Band has established itself over the years to be an extremely successful contesting and concert band performing all over the country. Since 2009 the band, in National Competitions has been placed in the top 6 no less than 22 times.  In that time the band has also progressed from 2nd section returning to the Championship Section in 2017 competing against some of the top brass bands in the country such as Black Dyke, Grimethorpe Colliery, Brighouse & Rastrick, Fodens, Carlton Main Frickley to name but a few.

​In 2018 the band cemented its position as a recognised Championship section band as a result of its position at the Midlands Regional Brass Band Championships and through many high class concert performances culminating at the end of the year appearances on both BBC television and BBC Radio.

​In 2019 the band became the premier brass band in Nottinghamshire following their grading position at the Midlands Regional Championships and saw Blidworth take to the stage in a production of ‘Brassed Off’ in conjunction with Argent Theatre of Newark, paying tribute to the mining community of Blidworth whose own colliery closed in 1989. 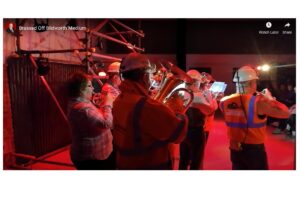 They have kindly allowed us to include this link to this video about their performance: