The Mining Blog is joining Clipstone Headstocks and Clipstone Village, Clipstone ex miners, surface, office and management workers, their families and friends  in remembering that 2022 is Clipstone Colliery’s Centenary Year.

This photograph shows the headstocks being constructed.  We have no date or other details for this photograph: 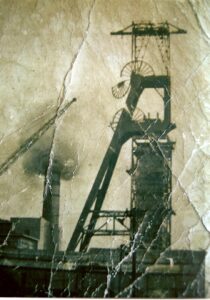 Headstocks under construction. No date or other details on the photograph.

Coal News in March 1956 in an article on mechanisation developments at the Colliery, records that:

“Sinking started before the 1st World War, but was abandoned in 1914 and not resumed until 1919.  First coal was drawn in 1922 and the pit soon became one of the most productive in the country.”

Clipstone worked one seam, the Top Hard, for over 30 years.  A seam average thickness of 4ft 10ins helped the pit’s productivity.

Coal News also reports that the:

Management and men were quick to realise the advantages of mechanisation.

Shortly after Vesting Day in May 1947, Coal News is reporting on the value of the use of the Meco-Moore at Clipstone Colliery, which had more of the new machines operating than any other pit in the country.  Mr T D Watson, Colliery Manager, says that:

“By its efficiency the Meco-Moore has helped to maintain output with a diminishing workforce.”

He goes onto say:

“The performance of these machines over 4 years has proved their mechanical reliability.” 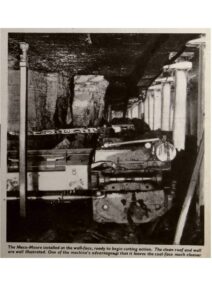 Looking forward to 1956, six  AB Meco-Moores were still producing up to 85% of the pit’s output. Coal News reports that OMS (output per man shift) averaged 170 cwt.

“high productivity had depleted the Top Hard reserves, and a plan had been drawn up as early as 1946 to replace the Top Hard Seam by deepening the shaft to the Low Main, a higher ranking coal with coking properties.”

We will continue our history of Clipstone Colliery’s developments and mechanisation in next week’s Mining Blog.