We are continuing our research into Clipstone Colliery’s history to celebrate its Centenary.

This text is from an article by Sid Chaplin in the March 1956 edition of ‘Coal News.  Photograph by Hayward Smead:

“High productivity has depleted the Top Hard reserves.  Within the next decade they will be worked out.  This was foreseen by the original owners, who drew up a plan of reorganisation in 1946 – to replace the Top Hard seam by deepening the shaft to the Low Main, a higher ranking coal with coking properties; to modernise the pit, and to expand output from 3,000 to 5,000 tons daily.  Preparatory work began in 1947.

“The first major task was the deepening of both shafts from the Top Hard winding level, 1,894 feet below the surface to the new Low Main winding level of 2,724 feet.  Then followed the building of the Koepe Towers and the carry out of other essential suface work. 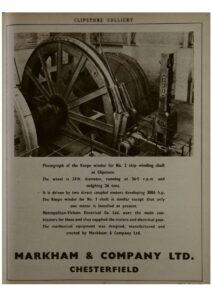 “First stage, now completed, was to concentrate teams of stonemen on the driving of a roadway to the North District.  The second stage will be to compete the roadways to develop the first panels of the East District.

“When both districts are in production, with coal being conveyed to the temporary tippler at No. 2 shaft, stage 3 will begin.  This will enable development teams to concentrate on making the permanent coal locomotive roadways, main loading stations, tippler, compressor houses and loco garages.

“Main development panels will be designed to coincide with the strike of the seam so as to ensure maximum loads of coal and stone for the locomotives.

“Trunk conveyor systems will carry coal from panels to central loading stations, district locomotives hauling the mine cars to a point near the shaft where they will be picked up by pit-bottom locomotives and taken to the tippler-creeper.  Here there will be room for 40 full and 90 empty cars.”

Categories: News.
« CLIPSTONE COLLIERY’S CENTENARY YEAR
WHAT WAS COAL WORTH TO NOTTINGHAMSHIRE’S ECONOMY? »