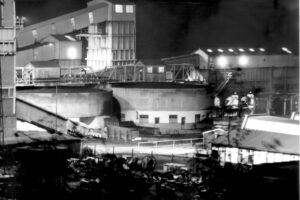 Today we have a very interesting post from Mick Coakley, one of our volunteers.  Mick is reminding us how much coal contributed to Nottinghamshire’s economy.

We are also remembering how much we have lost since its demise and how great was the sacrifice made by so many families in Nottinghamshire; particularly the families of those men who lost their lives in the pits.

Assuming at that time

Average Manpower at each Colliery 1,500

About 40+ Collieries in and around 25 miles of Mansfield

total yearly input from Coal Mines, into The Nottinghamshire Economy is

We also want to remember the other ways Bentinck Colliery and community contributed to Nottinghamshire.

Bentinck Colliery opened in 1895 and closed in 1998.  As a reminder of the other price of coal; 84 miners lost their lives at the pit during its existence, including a multiple fatal accident when 10 men died when two cages collided in the shaft, in 1915.

We are posting this photograph to remind us all how much coalminers contributed to the life of their community in so many ways.

This is a photo of Bentinck miners serving in the Home Guard: 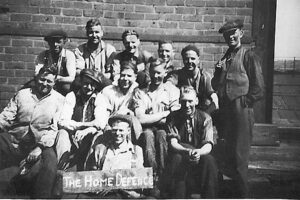 Bentinck Colliery Home Defence
George William Banton is 2nd from the left in the front row of the ‘Home Defence’ photo. The photo credit goes to Malcolm George Banton whose father was a member of the Kirkby-in-Ashfield Home Guard, and he told me that they never had a gun available to them for the duration of the war.
Picture from Malcolm George Banton.

As always we welcome your thoughts and contributions.