The Nationalisation of the Coal Industry was barely a year old before ambitious plans for developing the training of new recruits was unveiled. 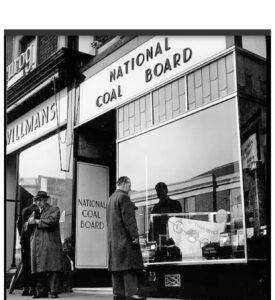 “to provide maintenance, wages in accordance with their ages and a complete thirteen-week training programme.”

Ernest Jones, the NUM President, whilst opening the Lound Hall and Grassmoor Centres in 1957, said the Centres would

“train boys in safety principles” and introduce “the ladder plan 0pening a highway for every lad to enter the higher fields of management and administration.” 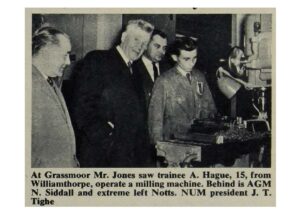 Ernest Jones NUM President speaking to A Hague, 15, from Williamthorpe, a trainee at the opening of Lound Hall and Grassmoor Training Centres, Coal News, December 1957 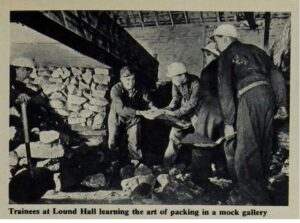 Trainees at Lound Hall learn the art of packing in a mock gallery, Coal News 1957

Categories: News.
« THEY DIDN’T GET TO BE OLD MINERS WITHOUT USING THE YOUNG UNS!
CELEBRATING OUR BRASS BAND TRADITION »