For a few weeks the Mining Blog will be celebrating the coal mining industry’s brass band tradition.

Following Vesting Day in 1947, when the NCB became the employer of over 800,000 people and the owner of 950 pits, it also found itself the owner of a number of brass bands; a musical inheritance that was either directly linked to the colliery that employed the men that played in them, or indirectly through the communities that bore their name, and which benefited from miners’ wage deducted contributions.

This photograph showing the Ollerton Brass Band marching with the NCB flag at Cinder Hill Pit, on Vesting Day 5th January 1947, links the two developments together.

In 1948 the Daily Herald promoted the brass band movement which it said:

“springs from the very soul of ordinary British folk, is a tremendous, spontaneous movement of musicians who devote their leisure to practice and rehearsal, and the giving of pleasure to others.”

The paper, then set out to document the activities of brass bands and sponsored a series of brass band contests, including for a time, the Nationals, which had been held since 1900.

This is the impressive trophy that bore the paper’s name for a time:

There were many other Brass Band contests and competitions in coal mining communities.  Many, of course linked to Miners Gala Day.

This photograph from the 1954 Coal News shows the Bestwood Colliery Black Diamonds Band receiving the trophy for the best marching band at the 1954 Berry Hill Miners Gala. 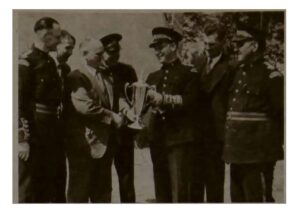 The Bestwood Black Diamonds Brass Band being presented with the prize for the best marching band at the 1954 Berry Hill Gala. Photograph credit Coal News.

This photograph, which is from 1939 and again from the Daily Herald Collection in the Daily Mail Archives, will be of particular interest to bandsmen and women and shows an expert checking a euphonium for pitch: 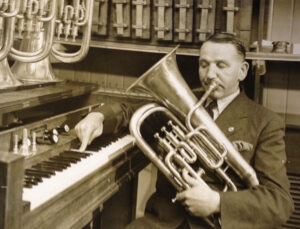 This link is to a British Pathe silent short film excerpt of a Daily Herald Brass Band Contest held in Brighton in 1947: