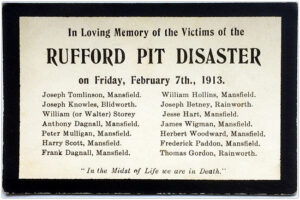 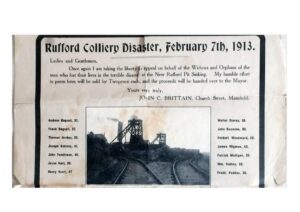 Rufford Disaster Appeal / Our grateful thanks to www.healeyhero.co.uk  website, Alison Walters, relative and John C Brittain who wrote the poem and has the copyright. The poem was to be sold for 2d each copy and the proceeds to be distributed to the widows and orphans.

Our final Remembrance Blog is a heart-breaking record of Nottinghamshire’s 20th Century mining disasters; where multiple deaths occurred.  The underlined links will take you through to the Healey’s Heroes website where a detailed description of each disaster can be found.  We are humbly grateful to this site and all its participants for the painstaking historical research and scholarship that has gone into these reports.

What stands out for us in all these reports is the heartbreak of the loss and the extraordinary bravery of the rescuers.

This report is from the BBC archives and concerns the roof fall of a gallery at Bilsthorpe Colliery on 18 August 1993, that trapped 6 men; and killed 3 of them.  In 1995, under-manager David Shelton posthumously received the George Medal for his efforts to save his colleagues, sacrificing his own opportunity to escape.  Ceremony marks mining tragedy 25 years on – BBC News 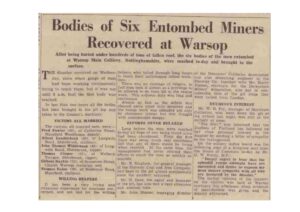 Report from the Sheffield Star of the Warsop Main roof fall in which 6 men were killed.

Categories: News.
« WE MUST REMEMBER (2)
A TRAGIC LOSS OF 80 LIVES – A VILLAGE IN DEEP MOURNING »