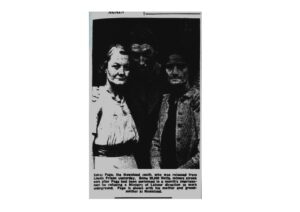 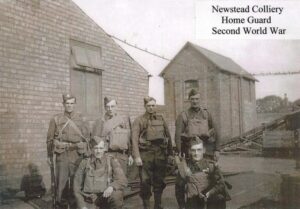 Continuing our theme of Remembrance, this is the story of –

THE COURAGEOUS STAND OF SID PAGE

SENT TO PRISON BECAUSE HE WANTED TO JOIN THE ROYAL NAVY*

During the 2nd World War, in the period from July 1939 to July 1941, a total of 80,000 miners nationally joined the forces. This was on top of 7,000 who had left the industry up to May 1941 to work in other industries. This was not just a loss of men; it was also a major adverse effect on the average age. It soon became obvious that a serious manpower crisis was looming. By mid 1941 coal shortages were being experienced, something would have to be done.

The national coal production figures 1939 to 1945 illustrate the problem:

The continuous fall in output was very serious indeed.

The control of the mines was taken from the owners and put into the hands of the Churchill’s Wartime Government via Regional Controllers, and a National Coal Board. In the case of Nottingham it was a Mr. Evershead, appointed as the Regional Controller.

The government’s action came in 1941 with the Essential Works Order (Mining). This order put a restriction of movement on all miners, it ordered the compulsory registration of all ex-mineworkers and it also drafted back into the mines all those fit enough to work there. The E.W.O. also had set up various disciplinary measures including attendance committees, which included workmen’s representatives along with the use of the courts.

There was an underlying dissatisfaction with the position of the younger miners. On entering the industry a sizeable proportion were given jobs on the colliery surface, and it was these jobs that were seen as being outside the E.W.O. The lads so employed saw an opportunity to get out of the pits and join up in either the navy, the army or the air force. After all, the very emphatic advertising campaign told them that the place to be was in the armed forces, so much so that anyone not in them was judged to be hiding behind the status of ‘in a reserved occupation’.

Newstead Colliery had employed a group of about sixteen young hopefuls intent on joining the forces. To do this they had to avoid going down the mine and therefore had to remain as long as was possible in a surface job. Of course the colliery management thought otherwise and set about forcing them to go down the mine.

Persuasion by one means or another, including sacking them, forced them to comply.

The Courageous Stand of Sid Page

One by one the young miners succumbed to the impossibility of their case until it came to one lad who would not accept the order, “get thee down t’pit where you belong”. His name is Sid Page. He insisted that he be allowed to go into the Royal Navy. So he firmly stood his ground, and he had many supporters amongst the miners of Newstead.

He was given the sack. Three months went by and to the Courts they went. The Court’s judgement went against Sid and a sentence of Thirty Days in Lincoln Prison was given.

The harsh verdict surprised even the employers. Sid, was a very popular lad with many friends, they reacted immediately and stopped work on Monday 13th September 1943.  Newstead Colliery found itself on strike, with Sid Page now under lock and key and out of harm’s way.

How the Dispute was Resolved

The world outside Lincoln Prison was embroiled in a labour dispute which by now had brought the whole of the Nottingham coalfield to a standstill, with the real prospect of the issue becoming an unprecedented national strike and in wartime too. The Courts could not of course solve the problem. Meetings were convened with the two sides in dispute and it was immediately agreed the use of the Courts would not be sought and that Sid Page would be seen in the prison by Joe Birkin, the Union’s Vice President and Anthony Jackson, the Newstead Colliery Manager.

There then followed a deputation of Bill Askew and four workmen who met Mr Evershead, the Regional Controller for the wartime Government, and they put certain demands forward. These were that no further prosecutions be made, that there be no direction of surface workers and this be made clear in the E.W.O. Act by treating them equally with other young men outside coal mining when reaching the call-up age. The demand made that Sid be pardoned had already been met as the Home Secretary, Herbert Morrison, had signed an order for this to be done.  Sid served 8 days in prison.

A mass meeting of striking miners was held in Hucknall which passed the following resolution: “We resolve that as the Strike Committee conducting the dispute in the Nottinghamshire coalfield, having been assured that Page is released, and further being of the opinion that outstanding cases are not likely to be brought into the Court, pending the Government considering the points brought forward by the Strike Committee and convened by Mr Evershead, are prepared to recommend a return to work having been given a guarantee against any victimisation.

To his credit, Sid, by now a young man with his world shattered, abided with the advice and pleas made to him. He agreed that as it was his lot in life, like those millions before him, he would go to work down Newstead Colliery becoming a coalface worker. He abandoned his hopes of becoming a sailor. It was never his intention to cause such a fuss and he was greatly embarrassed by it all.

*Thanks to Brian Walker and Roy Peters for the original article in the Ashfield Historian 1996.