A TRAGIC LOSS OF 80 LIVES – A VILLAGE IN DEEP MOURNING

WE REMEMBER AND WILL NEVER FORGET

A TRAGIC LOSS OF 80 LIVES – A VILLAGE IN DEEP MOURNING

We are continuing our theme of Remembrance to take in the appalling loss of life that occurred at Creswell Colliery on the 26th September, 1950. 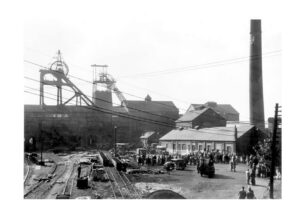 Thanks to the Derby Telegraph and Denis Thorpe for this photograph 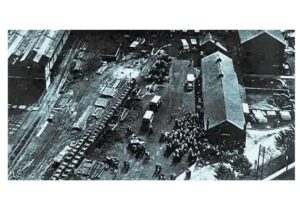 The Inquiry into the disastrous accident which occurred at Creswell Colliery, Derbyshire, on 26th September, 1950. resulting in the tragic loss of 80 lives, had to be held in two stages. The accident was due to a disastrous fire which started at a transfer point of the trunk belt conveyor system in the South Western Main Intake Haulage Road in the High Hazel seam. Because of tbe intensity and extent of the fire and of the inability to get it under control, it was found necessary to seal off the part of the mine in which the fire was located in order to extinguish the fire by depriving it of air. Not until the district was reopened about one year later. were investigators able to study fully the origin and extent of the fire and the probable course of events inbye where the victims had been at work.

The Inquiry was opened at the Miners’ Institute, Creswell, on the 17th October, 1950, and, after hearing evidence from 26 witnesses about conditions and happenings up to the time when the fire was sealed the Inquiry was adjourned.   It was resumed on the 27th November, 1951, when eight new witnesses were called and four of the previous witnesses were re·examined,

The fire started at the No. 2 transfer point about 3.45 a.m. on the 26th September, 1950. 232 persons were underground, of whom 133 were employed in the South-West District beyond the scene of the fire. Shortly before the fire started, however. two workmen had left the district, thus leaving 131 persons inbye at the time. Of these, 51 persons escaped by way of the return airway. The remaining 80 persons were caught by the fumes and lost their lives. They were later certified as having died from carbon monoxide poisoning.

This link takes you to the full report published by the Ministry of Fuel and Power in June 1952.

The Report describes the events leading up to the fire and draws conclusions and makes recommendations concerning preventing and fighting conveyor fires, warnings that need to be given and escape routes that need to be available; specifically that the provision of two main intakes should be a statutory requirement for such districts in new mines and in new districts of existing mines.

WE REMEMBER AND WILL NEVER FORGET.

Crowds waiting for news of their loved ones