1627 First recorded use of black powder for rock blasting (Hungary).
1670 Black powder use spreads to tin mines of Cornwall England by German miners

Explosives are used in underground mines and quarries to break coal and other rocks. An explosive is a solid or a liquid substance or mixture of substances which change themselves instantaneously into a large volume of gases at high temperature and pressure when a flame, heat or sudden shock (detonation) is applied to it 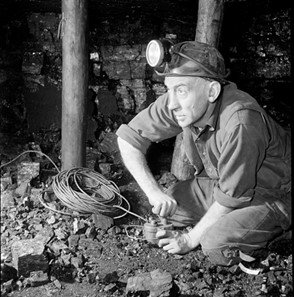 Charge-man makes sure no loose stone on ripping lip.

Second job set side breaking off bars at sides.

Forth job remove first bull bar with a bit of rope or shot-firing cable placed in the props. (Watch out for loose stone falling as the bull bar is removed)

Fifth job, Charge-man and helper bore 6 bottom holes in the stone, with borer and 4ft drill rod, making sure to put a new bit in the drill rod to make boring easier, (six holes is to make sure  the stone is small better for shovelling).

Seventh job, Deputy and charge-man insert gun powder sticks with detonators into the six holes and ram them with clay taking care not to break the wires from the detonators.

Eighth job, couple all the wires together making sure there is a circuit and then couple the wires up to the shot-firing cable. (shot-firing cable is run out down the gate for about 30-40 metres a safe distance from the shots to be fired).

Ninth job, Deputy checks for gas around the lip

Tenth Job, tell men to go to a safe place onto the face as the shots are going to be fired.

Twelfth   Job, Deputy checks that there is no one around the ripping lip.

Thirteenth Job. Deputy shouts Fire, turns the key on the battery and presses the button, smoke and awful smell comes down the gate.

Fourteenth Job, Deputy checks the shots have fired, informs the men everything alright.

Fifteenth job, Charge-man trims up the lip of all loose stone.

Sixteenth Job, Charge-man and helper put three holes in the middle of the lip and two in the top, standing on the stone from the first shots. (less holes to make bigger stone for packs)

Eighteenth Job, Deputy and charge-man put the gun powder with the detonators’ in to the hole and stem with clay being careful not to break any wires.

Nineteenth, Couple all the wires into a circuit and then couple the shot firing cable to them.

Twentieth job, Deputy checks for gas around the lip.

Twenty-first job, tell all men to go to a safe place onto the coal face as shots are going to be fired.

Twenty fourth Job, Deputy checks that there is no one around the ripping lip.

Twenty fifth Job, Deputy shouts Fire, turns the key on the battery and presses the button, smoke and awful smell comes down the gate.

Twenty seventh Job, Charge-man trims up the lip of all loose stone and makes safe.

Twenty ninth Job, Charge-man and helper fetch the ring bow from down the gate and place it on the horse heads, chock it up put struts on and board it in

Thirtieth  job, clean up all the stone putting into packs., Charge-man and helper put tight side pack on.

Thirty first Job, Charge-man and helper build scaffolding, while rest of team fetch ring legs, struts and boards from down the gate.

Thirty second Job Couple ring legs to ring bow with ring plates and bolts, strut them and board them in.

“This would be setting one ring on day shift; it would be two rings so double the work on nights.”

Brian Morley, Mining Artist, describes the following scene, when the rippers were ready for firing the shots,  in his Exhibition Catalogue which we hope will to be on sale soon.

Categories: News.
« Out to grass
Explosives and Explosions »