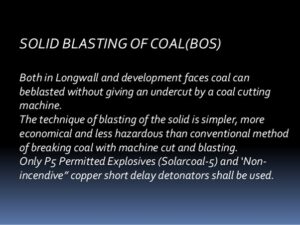 When it isn’t an option to undercut/middlecut/overcut we have to “fire off the solid”. In headings we start off by boring a “box” this is in the centre of the heading, it is what it says, you would bore a box shape of holes in the stone/coal and then bore the whole heading around the box.

When the shot-firer fired the shots the 0 detonators in the box would go off first and then all the other delayed detonators would go off in sequence, it would only be a split second for each detonator to explode one after the other.