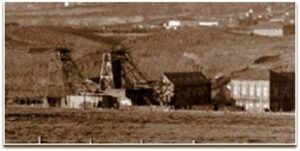 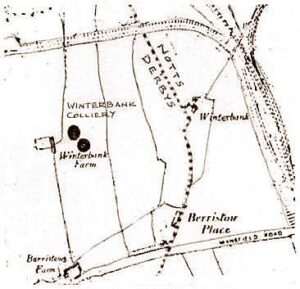 At 9pm on 15th February 1937 there were two explosions in the Waterloo seam on 11s district at South Normanton colliery (Derbyshire), locally known as Winterbank (South Normanton Colliery Co). 7 men were killed:

The men who died were:-

Those severely burned and take to Mansfield General Hospital were:-

While in Hospital, Thornley told his story:-
“The coal cutter was at work at the face just after nine o’clock, three quarters of an hour before the shift was due to finish. I then heard a sudden rumble over the coal face. It did not seem to be very distant, in fact, it was quite near.
As soon as the weight had got settled there was a flash and I saw nothing but fire and smoke and swirling clouds of dust. We were flung in all directions and did not know which way to turn. We did not at first realise what had happened.
I could not see any of my pals because for the thickness of the air. I put my arms up to try and gasp for breath, and my face felt just as it had been skinned. I struggled along towards the gate end but I had not got very far when there came another explosion, this time not so terrific but the air seemed to reverse and there were more clouds of swirling dust. After that I remember nothing more until they put me in a tub to take me to the bottom of the shaft.“

The inquest into the disaster was held at Alfreton before Dr. R.A. McCrea Coroner for the Scarsdale District. W.E. Truswell, deputy in charge of the district in which the explosion occurred, said that he had made careful examinations for gas but had found none. He gave his account of the conditions underground and the Coroner asked him if he thought the a heavy fall would account for what he thought was a second explosion.

The witness said it could be but he thought it was an explosion. He stated that he had not found gas in the district for over twelve months and then only a small amount. The men on the face had flame lamps and electric lamps and he had never seen men in the pit with cigarettes or matches.

Mr. J. Cowan, Electrical Inspector of Mines, told the court that he was perfectly satisfied that the coal cutter could not have been the cause of the explosion but he could not speak regarding the portion of the trailing cable that was buried.

Mr. Mein, the manager, issued warrants to certain men and had every reason to believe that the searches were carried out satisfactorily but the evidence of the Constable indicated that the searches were not as effective as he thought. The manager explained the fall by saying that the floor had given way. He explained that there were three seams underneath, two of them being worked by other companies and he had no previous knowledge of these workings. He thought that breaks in the floor caused by the working of these seams had allowed the gas to come in but the two seams that were worked were not in the exact spot where the fall occurred.

Mr. T.E. Pickering, Inspector of Mines, said that he had known the Colliery for seven years and with regard to ventilation and gas, he regarded it as a perfectly safe pit. The roadways were in a good condition. On the day of the explosion he reached the mine about 11 p.m. and was taken as far as the loader end on the No.11’s stall and, with the manager, he investigated the left bank. He found a certain amount of timber run out and could not get past the coal cutter because of a fall. He was with the party that recovered three bodies. He thought the point of the explosion was near the coal cutter and that there was a second explosion in the neighbourhood of the first which was very violent. The cause of the second was thought to be gas coming from the floor ignited by some flame or other.

Mr. Pickering said that they came across Willis’s body about 8 yards from the coal face and under his cap, who was about a yard away from the body, they found three parts of a cigarette. They found two electric lamps near the coal cutter and one flame lamp near the loader gate. All the lamps were tested and found to be in good order.

He suggested that the explosion was caused by someone smoking or striking a match to smoke in the left bank. When men struck matches on the surface they throw the dead match down, but in this case if a match had been struck which he did not want to be found, it was usually replaced in a tin. There was some unusual weighting above and below the seam which they were working and the Bentink seams of coal were being worked under the South Normanton Waterloo seam. He said-
“It would have been advisable and a very wise thing to do for colliery companies working in close proximity and underneath each other to consult their respective plans but there is nothing of an obligatory character in the Act of Parliament making such mutual inspection of the plans if necessary. Such a point was now under consideration by a Royal Commission.”

After the verdict had been delivered the Coroner commended the bravery of two men Guy and Waltho for their bravery and Mr. W.H. Mein, the managing director of the colliery company, expressed the company’s appreciation of the gallant efforts made by the workmen, rescue brigades, doctors and nurses.

A naked light pit until 1934, this pit had a 40-year-old enviable safety record. The Deputy for the panel, William Truswell had noted that severe weighting had occurred at 9pm, followed by an extensive fall at the face line. The Waterloo seam was opened in 1900 and Top Hard and Dunsil seams had also been worked above. Although a Derbyshire pit, it lay almost on the border with Nottinghamshire and was under the Nottinghamshire Miners’ Union jurisdiction.

‘Many men and women crowded the pit gates waiting to hear of the dead, or with relief, the survivors. A call for volunteers to go back down the mine to assist in recovery operations was answered positively to a man, even though the men who had just come up the pit having escaped injury and were obviously somewhat traumatised by the situation, all were willing to risk injury if not their lives in doing so’ – (quote from a survivor, my friend Ralph’s father Rufus AM Simpson, himself included, of Percival Crescent, Sutton-in-Ashfield, who later went on to work at Bentinck colliery when South Normanton closed).