DREAMING OF A BETTER TOMORROW – POVERTY, HEALTH AND OWNERSHIP IN MINING COMMUNITIES

“For the common good.”

“It is over 40 years since I first heard the word Nationalisation.  In those days it was a dream.  Yet many years ago those of us who advocated it were told we were dreamers and that we should never live to see the day.  We have lived to see the day.” Mr E J Ley, Miners Agent for the East Midlands Division.  ‘The Nottingham Journal’, 6 January, 1947. 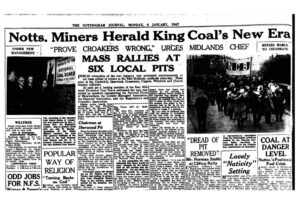 “The miners’ movement had been the greatest forward movement in advancing social legislation anywhere in the world.  The taking over of the mines was the first instalment of other great advances for what they believed to be the common good.” Alderman William Bayliss, President of the Notts Miners Council.  ‘The Nottingham Journal’, 6 January, 1947’. 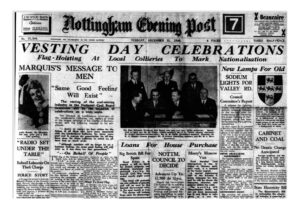 Thanks to Johnston Press, JPI Media and the Bilsthorpe Heritage Museum for these articles. 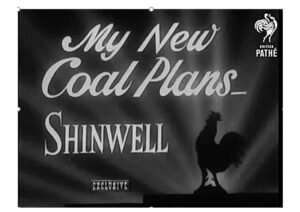 Timeline up to Nationalisation

During the 1930s working and living conditions for mineworkers and their families worsened.  Under investment in the mines gave rise to dangerous working conditions; safety standards were ignored and these gave rise to terrible disasters such as that at Gresford Colliery in 1934 where 265 men and boys lost their lives.   In its aftermath numerous breaches of the law, speeding up of work and victimisation were found but ultimately its pit managers and owners were  fined only £140 each.

These are the Nottinghamshire mining disasters resulting in multiple deaths between 1913 and 1939: 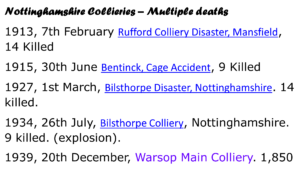 The outbreak of World War Two had revealed the privately owned coal industry to be ill-equipped to meet demand.  In 1944 a founding conference was held in Nottingham to establish the National Union of Mineworkers.  This Conference made clear its firm desire to put into effect a Miners’ Charter of demands on behalf of those who toiled in the bowels of the earth.  During the 1945 General Election Campaign the new Union declared:

“Labour stands for a nationally owned and controlled mining industry.  The Churchill Tory Government is against all forms of effective control and national ownership.  It prefers to put private interests before national needs.  Give Labour the mandate to make the coal mines public property.” From ‘A Century of Struggle.  Britain’s Miners in Pictures, 1889 – 1989’, National Union of Mineworkers.

Labour’s landslide victory in 1945 cleared the way for the passage of the Coal Industry Nationalisation Act.  All the rights, assets and liabilities of the industry were to be transferred from the coal owners to the new National Coal Board.