“To most of the owners of 1840, their men were hired hands, little better than sub-human.  The intolerable conditions in which so many men and boys worked did not impinge upon the consciences of the owners because they knew little, and usually cared less.  The owners had to do with the butties:  how the butties treated their employees was not their concern.“

These are the word of A R Griffin, from his book The Nottinghamshire Coalfield 1881 – 1981.  The photographs in this article are taken from this book.

This photograph is of the Old Debtor’s Prison, Radford, not far from Radford Colliery, A R Griffin says,

“Many miners found their way here one way or another.” 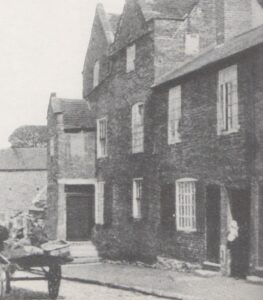 Nottinghamshire mines, until the middle of the 19th century, were generally run on the ‘big’ butty system.  The owner sub-let a pit to a pair of butties, who might also have a pit top boss called a stever or stover in partnership with them. These people effectively managed the pit setting on and continuing the labour, paying wages (often in truck, ie goods).  Griffin says,

“These were practical colliers themselves, with little or no education, and were usually harsh taskmasters.”

Payment in ‘truck’ which restricted miners to spending their money in ‘Tommy Shops’ and ‘Beer Houses’ was common at this time.

The Children’s Employment Sub-Commissioner was in doubt as to the reason for truck.  The butties were the owners of or had a financial interest in the ‘tommy shops’  and ‘beer houses’, and

“A child whose parents do not expend the greater part of the wages  earned in one or other of these nuisances, stands very little chance of permanent employment.”

The District Mines Inspector noted in 1851 that,

“Butties are often directly or indirectly connected with caverns or shops where miners’ earnings are spent in the purchase of bad and dear ale and provisions.”

Some beer houses were tommy-shops also.  At Portland Row, Selston (a row of forty-seven houses built in 1823 for men working at Portland Colliery), no. 1 was a beer house and tommy shop and nos. 25 and 26 were used as an ale-house.

This photograph is of a butty at Brinsley paying out his men in the pit yard, about 1910.  This was the ‘little butty system’  where pairs of butties were in charge of no more than one stall. 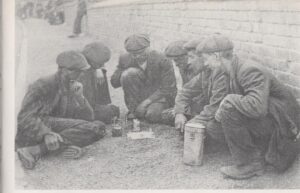 A Butty at Brinsley paying out his men in the pit yard about 1910. Photo from ‘The Nottinghamshire Coalfield 1881-1981’ A R Griffin