Women Writers of the Mining Community (4)

Leading us into our fourth and final theme, around Women of the Miners’ Strike of 1984-85 is ‘Norma Dolby’s Diary.’

Sorting out food supplies, soup kitchens and touring the country to drum up support became second nature to Norma Dolby during the miners’ strike. She was a pivotal person in organising the women’s movement and still is a person villagers turn to for help and advice. (source)

In October, the unrest began again. The nights were drawing in, and it was colder than ever on the picket lines. When the alarm goes off at five o’clock, you just feel like snuggling down again in the welcoming warmth of the bed covers, but then you think: we must not weaken, we must show the lads that we are there to back them up. (Dolby, 1987,  p.40)

The strike politicised Norma Dolby, as it did many, and she became involved in local politics – first as a councillor and, in this 25th anniversary year, as Chair of Chesterfield District Council – complete with her own chain of office. – BBC DERBY 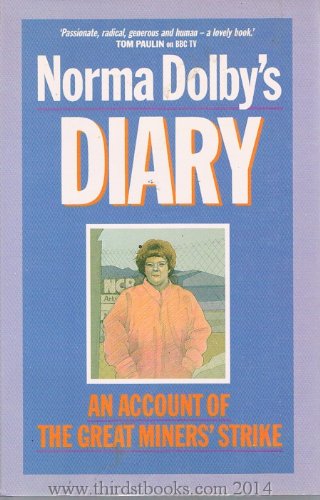 Tomorrow is our last blog of the week, before we move onto the final topic. What has been your favourite blog so far?