The beginning of the Rescue stations (part 1)

The first British mines rescue station opened at Tankersley in 1902. It was commissioned by the West Yorkshire Coal Mine Owners Association. Its building is grade II listed. In the United Kingdom a series of disasters in the 19th century brought about Royal Commissions which developed the idea of improving mine safety.

In the United Kingdom a series of disasters in the 19th century brought about Royal Commissions which developed the idea of improving mine safety. The commissions influenced the Coal Mines Act of 1911 which made the provision of rescue stations compulsory.

The first central rescue station to serve a large area, the whole of the Lancashire and Cheshire coalfield, was opened at Howe Bridge in 1908 under the management of the Lancashire and Cheshire Coal Owners Association. In order to select the most efficient and the safest breathing apparatus, an invitation was sent to all makers of such apparatus, British and foreign, to compete in a series of tests lasting several days, in galleries filled with an irrespirable atmosphere, and fitted with various obstacles which the men had to surmount. The Fleuss apparatus, which had been considerably improved by Mr. R. H. Davis, and to which the name “Proto” had been given, won the competition. This was the forerunner of the “Proto Mark W, which was developed from the early design, and which is still one of the two main apparatus in use today in British mines. The late Mr. R. H. Davis, later Sir Robert Davis, head of the firm of Siebe Gorman Ltd., the manufacturer of the apparatus, was probably the most famous designer of rescue apparatus of all kinds which the world has known.

Shortly after the opening of the rescue station at Howe Bridge, the first call was to assist at Maypole Colliery near Wigan, where 76 lives were lost. This was the first recorded use of breathing apparatus in Lancashire and one of the first in the country. At that time, there were only six trained men and a limited number of apparatus at the station. Following the incident a special medal was struck by the coal owners and each of the six men was presented with one. The second call came two years later, in 1910, to the Pretoria Pit at Westhoughton where 344 men and boys were killed in an explosion and there was evidence at that time of the considerably improved “Proto” apparatus. Again, a medal was struck and awarded to certain of the rescue men. This was the first time that several hundred rescue men took part in an operation, thus emphasising the tremendous progress which had been made in such a short time.

In 1909, rescue stations were opened at Aberamen and Crumlin in South Wales; at Mansfield in Nottinghamshire; at Altofts in Yorkshire; at Elswick in Newcastle, and at Cowdenbeath in Fife. At Birmingham University, in addition to the testing and development of apparatus, training was being given to rescue station instructors, as this was one of the urgent requirements in those early days. In 1910, rescue stations were opened at New Tredegar in South Wales and at Stoke-on-Trent.

The Elswick Rescue Station, built by the Durham and Northumberland Coal Owners Association, is of considerable interest in that it was the first station to have a team of permanent brigadesmen on the premises. It was thought that fire, both on the surface and underground, would probably be more common than colliery explosions, so it was decided to have men trained in the art of fire fighting, as well as in the use of breathing apparatus, and the establishment became known as the Durham and Northumberland Fire and Rescue Brigade. A Merryweather fire engine and an Armstrong Whitworth rescue vehicle were provided together with a very comprehensive selection of equipment for fire fighting and mines rescue. 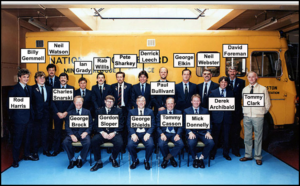 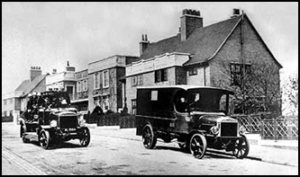 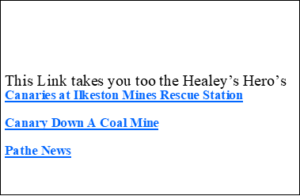