The beginning of Rescue Stations (Part 2)

Before 1906, rescue work was left to volunteers from the colliery at which the disaster occurred, led by mining engineers from neighbouring collieries.

A Royal Commission appointed in that year recommended that Central Rescue Stations manned by full time brigades should be provided in every coalfield by the owners, and that each colliery should also have part time rescue brigades of trained men.

Ilkeston Mines Rescue Station, sometime around 1920. Shows railings before their removal during the war.

Philip Healey and his young family moved into 11 Manners Avenue in 1954, just round the corner from the Rescue Station. Then as people left the station No. 67, one of the larger houses, one of the four cottages provided for married men and their families came vacant. (See photo ‘The beginning of Rescue Stations Part 1’ It is the nearest house on the last photo). 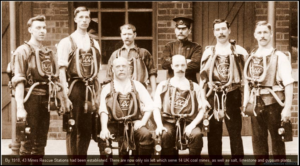 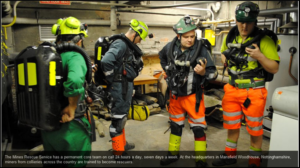 These photos illustrate Rescue Men of old and more recently.  They are the same calibre of men; we shall be forever grateful to these men and hundreds like them all over the United Kingdom.

These were and are the bravest of the brave and we salute everyone of them. It was good to know that if anything happened whilst we toiled underground, these men were prepared to put themselves in harms way and to rescue us, we owe them a deep debt of gratitude.

Photo’s and some articles courtesy of Bob Bradley and the Healy’s Hero’s web-site.

Healy’s Hero’s web-site is well worth a visit.

Categories: News.
« The beginning of the Rescue stations (part 1)
THANK YOU TO ALL OF OUR VISITORS »