Big changes to the ways underground roadways were supported 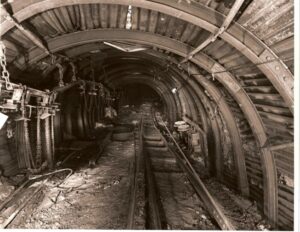 This photo shows the way coal mine roadways were supported until about the early nineties. The supports you see are what we called rings, rings came in three pieces a bow which is the middle bit you can see in the photo and two legs which attach to the bow with ring plates as you can see in the photo on the right, also attached are struts to tie all the rings together. 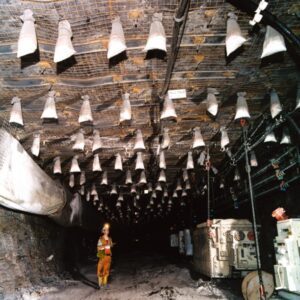 The second photograph shows a roof bolted roadway, metal straps in the roof are where the 8 foot roof bolts are put in, the straps come with holes in for the steel bolts to go through and steel mesh is placed over the straps to form coverage of the roof. Bolts are also put in the sides of the roadway, steel mesh is used on one side with steel bolts and plastic mesh used on the other side with wooden bolts. The plastic mesh is used on the side where the coal face will be, the coal face machine can then cut right into the roadway without hitting any steel.

The plastic bags you can see in the bolted roadway are filled with stone dust and are there for safety reasons, if there is an explosion or a fire underground these bags are designed to drop and smother the explosion or the fire. (Although a different design stone dust barriers were also used in the roadways supported by rings).

Another safety device used in Bolted roadways was what we call a telltale, a five metre hole would be bored in the roof and an a telltale would be inserted with a traffic light system showing just below the end of the hole, these were used to monitor any roof movement, if the roof had moved, remedial work would have to be undertaken at that spot, i.e. more roof bolts inserted or longer roof bolts could be used to make the roof stable again.

As always we are interested in your stories, experience, knowledge and comments regarding our posts.  Let us know what you think.