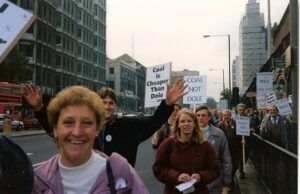 1992 March and Rally held in London by pit managers, under-managers and others from BACM

Like me you probably never gave it a thought that there were some managers who were against the pit closures program, well here’s proof that some of them were.

This was a march and Rally held in London by pit managers, under-managers and others from BACM. I’m not sure of the date it may have been the 1992 round of pit closure’s that they were protesting about.

Ted Bishop took the photo, the only one I can recognise on the photo above, is the man on the right the other side of the railings with the beard is Albert Knight. 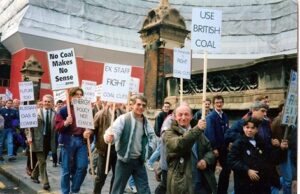 “If anyone recognises anyone else in either of these photos I would be intrigued to learn their names.”

Eric goes onto say. “I worked at Cossell Colliery from 1st of January 1962 to 1966 when it closed, Albert Knight was the senior under-manager and I was his book lad that would be in around 1964/5.

Albert upset the men when he first came to Cossell, men would come up the pit early when they had thrown their stint off and sit on the pit top smoking, there was no means of keeping the men underground because Cossell was a drift mine and you could ride the belts out of the pit, although they couldn’t go because they would have to clock out.  Albert had built, a brick cabin and put a steel door on it with just a one foot by one foot serving hatch at the point at

number 2 belt, men then had to carry a brass check and give it in at the brick building going into the pit and wait to collect it when they were coming out at the end of their shift, they couldn’t get their clock card without giving their brass check in first.

I was 17 at the time and one of my jobs was to give out the brass checks to the men so they could get out of the mine, it was a thankless job, you maybe can imagine men queuing up to get their checks and wanting to get out the pit to have a fag, it was bedlam, they would be banging on the steel door and threatening to beat me within an inch of my life, remember I’m 17 still wet behind the ears and I’ve got burley rippers threatening to kill me, I was so glad my name came to the top of the face training list and I got out of the cabin.

A few years ago through a mutual acquaintance I had the opportunity to interview Albert, he wasn’t well at that time, he was suffering with pneumoconiosis and was on oxygen and had other illnesses as well, I think throughout the whole 2 hours we were there I only asked about four questions,  He had, had a very varied life and I just sat there enthralled with the man.