‘Our Mam’ – A Tribute to Gwendoline Macleod

First of all, we would just like to say a massive thank you to everyone who have read, liked and shared our blogs over the last 4 weeks. It has been incredible to share these stories and hear your stories too. Women have always played such an important role in the community, particularly in our mining towns, and we feel that their contributions should never be overlooked or forgotten. To end this month’s theme, we have a touching tribute from Dr Lisa Mckenzie PhD, who has shared a blog entry with us, about her late mother and her involvement in the Miners’ Strike 1984-85. Thank you Lisa, for taking the time to write this and for sharing Gwen’s story with the museum.

As always, if you have stories to share with us of this nature, then please do get in touch. We would love to hear from you. Email: nottswomenandmining@outlook

In truth I wish I wasn’t writing this – I wish my mam was writing her own account of her memories and her reflections of 1984 the Strike and what has happened to working class people ever since – I wish she was sat with me now asking me to spell check through what she has written as she did in 1984 sitting on the floor handwriting hundreds of letters to Trade Unions all over the country and the world asking for solidarity and letting them know who we were.

Gwendoline Macleod (nee Reed) – Gwen – our mam – trade unionist, life long socialist, secretary of the Women Against Pit Closures Ashfield Group – proud working class woman – she was loved, respected and admired by people who knew her and people who had only heard of this tiny woman with black hair who could make herself heard from one end of a packed pub, meeting, or conference hall to the other. When it came to her family, her community and her class she was a warrior and full empathy and love for us all. I think that is what really drove her – love  – the love she had for working class people and especially for mining communities – mining and the working class labour movement ran through her in everything she did – it was impossible for her to ever think of herself as an individual she thought in the collective and for her it was never about “I” it was always about “Us’ – her biggest fear was when the National Lottery started and my Dad started playing it  – her fear was he might win.  She loathed the British class system, snobbery, and ‘standing in judgement of others’. She loved who she was, and where she was from, she loved living on the Carsic Estate in Sutton In Ashfield and saw no reason to ever be ashamed of where you came from – her pride in the working class struggle and her faith in the working class family was unbreakable.

It was March 9th 1984 – I remember this day it was my 16th Birthday and from my freezing cold bed on Carsic Road despite my Dad being a coal miner and us living amongst one of the richest coal seams in the world the housing was always baltic in 1984 – from my freezing cold bed I knew it was early there was no light coming in from the window and I could hear noise on the street – men’s voices coming up the path – this was all wrong it was a weekday and My dad was on earliest at Silverhill Pit where he worked – the men’s voices came into the house and I heard my mums voice taking control – I was hooked I needed go down and find out what was happening – in the kitchen sat my Dad – Ian Macleod, and my Uncle Brian (Brian Reed) he had been picked up along the way from Sutton Pit – I imagine before he went home he needed to see his elder sister for reassurance. The Yorkshire Miners had turned up in Nottinghamshire and was picketing – my Dad and Uncle had of course turned around – there would be no crossing of picket lines in this family – both of them had a realisation that this was only the start of something and they needed the guidance and the strength of my mum. The two men sat across from each other on the wooden benches in the Kitchen – but my mum she was on it – making coffee – making lists of what needed to be cancelled the butcher, the pop man and even the milk man – she instinctively knew that this was not just another strike another industrial dispute but the fight for our lives, our communities and our class. We were in it for the long haul. She talked excitedly of what we were going to do – she was a trade unionist – as a young woman her fire had been spotted on the factory floor by other trade unionists and she had been sent to Trade Union School by The National Union of Knitwear and Trade Union Workers– I remember the plastic ring binder folder that would sit proudly on the kitchen table thick with pages of learning – it was the only formal education she had – she had been in the factory since she was 14. There was nothing she didn’t know about trade union business it pumped through her and came out in passionate speeches and monologues about working class people’s history of resistance – she struggled reading and writing having no real formal education but she listened and made time for everyone – visiting elderly and retired shop stewards from all unions listening to their stories recounting them as lessons to rest of us. The traditional way that working class people had been organised for generations, now long lost to ‘career organisers’ and massive amalgamated institutions estranged from the working class root.

In the early days of the Strike of course our house on Carsic Road became the first strike centre in Ashfield as my Dad took on the role of picket manager and my mum and my aunties and the other women who was with us in solidarity not all of them had husbands who were striking miners but were there for their class and community. We were put to work writing letters, asking for money and support, eventually we organised a strike centre at the old Eastbourne School in Sutton in Ashfield we served breakfasts, dinners, we had a food bank, and a clothes bank. I never went back to school there was no point I was leaving in May anyway and the police had infested our town I didn’t want to go to school having to walk past them everyday. I was put to work on the clothes bank the delight I took as a 16 year old sorting out donated clothes from all over the world – we would get barrels from Poland and Russia – the handmade knitwear that came from the Eastern European families kept us warm throughout that cold winter in 84/85.

My Mum would wake me and my sister up at 6 o clock in the morning my aunty Sharon would pick us up in her car with my aunty Janet already in my cousins wrapped in blankets on the back seat and we would go off to the Strike Centre where other women and kids would be there making the breakfasts for us all – the kids would go off to school and then the men would return from picketing – my mum just had enough time to have her own breakfast before she started her shift at the Pretty Polly factory where she worked on the toe seaming machines and continued representing the women she worked with as their shop steward even though many of those women had husbands who worked through the strike – I have never thought how difficult that must have been for her until very recently.

She never faltered with her love, and dedication to the working class labour movement and to the working class struggle – she didn’t live long enough – she died through her injuries in a car crash coming from a union meeting in Leicester rushing back to see the girls on the evening shift at the Pretty Polly in Sutton in Ashfield – she was 50 years old and her short life burned brightly.

Loved, respected, and feared by Labour Party centrists and careerists like Geoff Hoon who only had eyes on a safe seat in Ashfield from where they could sit in Westminster.

A true working class woman, and a Sutton Lass.

[Gwendoline is pictured below] 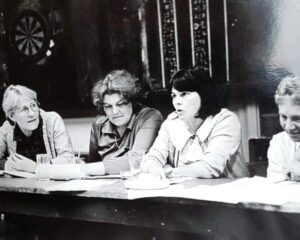 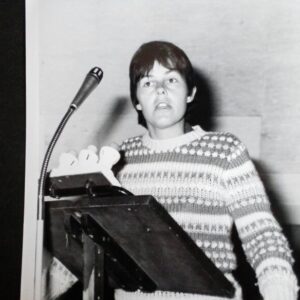 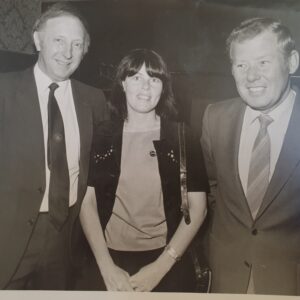 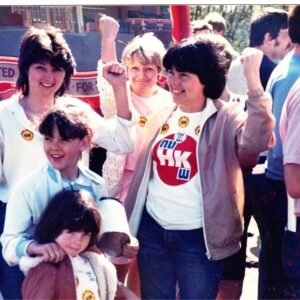