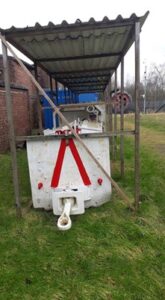 Things move on in the pits after the diesel loco’s, Electric/battery’s seem to be the next move to get men and materials in and out of the pit.

Pony Loco’s, these were a small battery operated trains with rubber on the steel wheels, the battery would measure about 4 foot long and about 18inche high, they were used in the pit bottom to organise the full tubs and emptys. The full tubs would be taken inbyE with the materials that would be used in the headings and on the coal face. The empty tubs would be sorted and sent up the pit to be reloaded. They were also used in the gates to take the materials needed upto the coalface and in the head end of the headings.

Bobo’s these were twice the size of the pony loco’s with two battery’s and were used for transporting men and materials inbye and outbye on the main roads. Rubber was also on all the steel wheels. 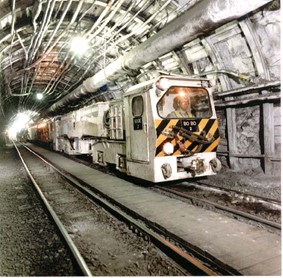 Coco’s, were very similar to the Bobo’s but with more power and were able to haul heavier loads.

FSV’S Free Steered Vehicles, All the other Loco’s were run on track, so railway track had to be laid throughout the whole pit for the loco’s to run on.

Not so with the FSV’s these had 4 big rubber wheels and didn’t need track to run on, they had a big bed at the front which could carry almost anything. They were a very versatile machine not only could they carry supplies upto the coalface and headings, they could also have a bucket put on them and they were able to do all the dinting of the floor when convergence happened.

There was a couple of problems with them they were diesel powered and created an awful stink which was not nice in an enclosed environment. They were also somewhat dangerous if you happened to be working in a roadway in which the FSV’S were working as sometimes the driver could not see you as the position of the driver was at right angles to the way the FSV was going, so he was looking over his right shoulder all the time.

Categories: News.
« HSE REPORT Locomotive Haulage – Primary Cause of Accidents and Runaways
HER STORY (AN INTRODUCTION) »