1954 CISWO PLANS FOR A MINERS’ EISTEDDFOD’

NOTTS MINERS’ SOCIAL CENTRE TO BE ‘BEST IN BRITAIN’

In this 1954 ‘Coal News’, W L Miron, speaking as the Chairman of CISWO announced ambitious plans for the Berry Hill site.

He said, “On this site next year will be a Miners Eisteddfod’; the programme will include Brass Band and Choir Contests and a handicrafts exhibition.”

“Eventually CISWO hope to build a hall at the centre for the bigger indoor events and rallies that cannot be held outside.’

He went on to say,

“Starting next month, the centre will also be used as a week-end camping site for young miners.”

The Notts NUM had already provided the first of five annual donations of £5,000 towards the cost of developments at Berry Hill”.

If you have any memories or photographs of any of these events, we would love to hear from you. 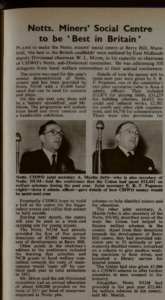 Categories: News.
« POSTPONEMENT OF THE RE-OPENING OF THE NOTTINGHAMSHIRE MINING MUSEUM
“Thousands lined the streets of Mansfield as the Annual Miners Gala procession went past” »