Chris Wrigley’s journal on Women in British Coal Mining provides us with great illustrations of women workers and the tasks they would carry out.  For today’s blog, we thought we would share some with you. 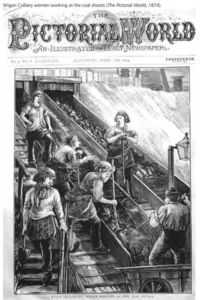 One of the most striking findings, through Wrigley’s research, is how historians have long since been divided over whether the use of female labour was exploitative or whether the decision to ban women from underground work was a factor of the patriarchy. An interesting view by Jane Humphries argues that there were unique benefits to the family unit working underground, benefits for the whole family and not just the male. There remained a loyalty between the family unit in working conditions, as they protected and provided for each other. (Wrigley, 2015/16)

More on Jane Humphries can be read here, in a journal that features:
Alternative Perspectives on Sex-Specific Labour Legislation

The video below from the World History Project effectively provides visual insight into these conditions for women and children at the time. WATCH HERE 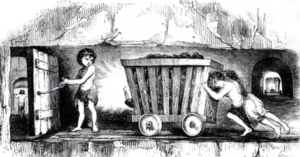 As you can see, although mining has long since been associated with masculinity, there remains an largely untold and unknown history regarding women and children. In the eighteenth and early nineteenth centuries, women, girls and boys were ancillary to their work at the coal face. (Wrigley, 2015/16)

Women were banned from underground work due to the tough working conditions. Before the ban, women had worked in family units underground but during their time down the mines, women would work in partial nakedness, alongside semi-men. This was allegedly the case for girls as young as 6 up to women in their 20s. Often women and girls would be expected to work with men outside of their family unit. When these conditions were unearthed by Commissioner Reports, it was a huge shock to middle-class and upper-class Victorians. It was one of the main reasons why the ban was implemented. (Wrigley, 2015/16) 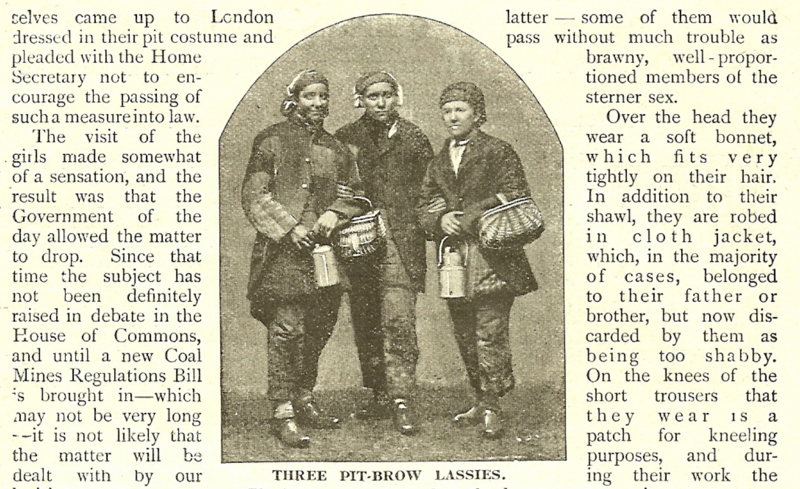 The image above, shows a picture of three pit-brow lassies from Wigan. As one can see, this image subverts preconceived ideas/notions of women, often associated with domesticity and the family.

To provide wider context of women’s role as workers in the mining community, the article below is an insightful read.

Having women in the mines was financially advantageous to both their bosses and their families. One “underlooker” told the commission that women were paid roughly half of what men were, allowing their employer, the collier, to spend “one shilling to one shilling sixpence more at the alehouse.” Women had worked in Staffordshire mines for centuries, adding crucial coffers to family kitties.

The outcome of this inquiry was swift—the 1842 Miners and Collieries Act forbade all women and girls, and any boy under the age of 10, from working in the mines. They would be replaced by pit ponies, an expensive alternative. Families felt this sudden loss of income acutely. One female miner said, afterwards, that though working underground was not pleasant, it was certainly better than starving. The penalty for employing women in mines was small enough that some women were still illegally employed below-ground—especially as mine-owners often passed this cost onto the women themselves.

The above research is extremely interesting when we think back to the mines and mining, as often, people believe that women’s active role began in the 1980s, spurred on by the 84-85 strike. However, history shows us that women played a pivotal role in working-class, mining communities, long before the Labour and Trade Union movement emerged.

Do you have any stories of female ancestors in your family history that worked down the mines, or at the surface? If so, we would love to hear from you.

Feel free to share any stories or photographs with our research team, by dropping an email to nottswomenandmining@outlook.com
(by emailing, you are consenting for your stories/images to be archived)