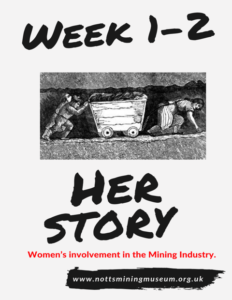 Upon looking into this theme, I have spoken with several of our team members about their own experiences and encounters with women, in the mining industry and wider community. Barry Donlan spoke about his vivid memories of women workers at the Hosiery Factory, back in the 1970s, as a huge percentage of the workforce were wives of miners, who were heavily involved in the Trade Union Movement. Barry explained how there was a huge possibility of a solid women workforce back then. However, that was nothing new and in fact, was actually the product of a long line of women workers in the community. Women as workers dated back through the centuries, as it can be traced back, to a time where women would actually carry out physical labour in the mines.

Professor Chris Wrigley sums up the history of women’s involvement with British Coal Mining best, in his historical journal that looks back through the centuries, to a time when women mined for coal:

There was a long history of female labour underground in British mines, and an even longer history of women working in surface jobs.

As you can see, the mines were not always occupied by men and at one time, heavily relied on the labour of women and children.

(An interesting report found here shows the conditions that women and children faced and highlights later Acts that were brought forth as a result.)

The Coal Mines Act was passed in 1842 as result of Lord Shaftesbury’s report into the employment of women and young children in coal mines. The law stopped all females and children under 18 years of age from working underground. For many mining families the loss of income from these working women was a disaster. However, the Mines Act did not forbid girls and women from working on the surface at the mine and they came to be known in Lancashire as ‘pit brow lasses’. They worked at various jobs ranging from loading wagons to sorting coal. Here, we have a relevant local piece of information regarding women in the mines, in Nottingham.

Women had often worked
underground in some parts of Britain
in medieval and early modern times.
Medieval mining in Britain was
generally on a smaller scale than in
medieval Germany. In such areas as
Nottingham mines involved a small
area of a manorial estate and were but
one component of a mixed manorial
economy. Until the fourteenth century
mines were leased to small groups
of colliers. Later the gentry acted as
middlemen, and from the sixteenth
century mines were managed directly by
the owners.

This extract supplies an interesting contextual account of how Nottingham mines operated at the time, but also presents us with a timeline that enhances our understanding of just how far back women in coal mining can be traced.

Do you have any questions about women’s role as workers? Don’t forget to check our upcoming blogs over the next couple of weeks, regarding women through the centuries. So, some of your questions may be answered in later posts. We will do our best to answer them with the resources and research we have to hand.