HOW IT ALL BEGAN – THE DERBYSHIRE CONVALESCENT HOME AND HOLIDAY CAMP

This is the full history of the origins of the Derbyshire Miners Convalescent Home and Miners Holiday Camp and this text is taken from the Derbyshire County Council Records Office website.  Follow this link for the article:  CalmView: Overview 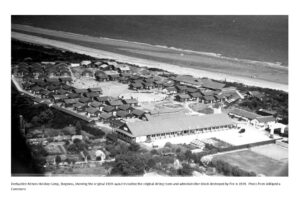 A convalescent home was established in Skegness in the late nineteenth century by the Derbyshire businessman Edward Terah Hooley for miners in Ilkeston. Financial difficulties led to the creation of a new governing body for the home chaired by Barnet Kenyon, President of the Derbyshire Miners’ Association (DMA), who secured support for the home from colliery owners and miners throughout Derbyshire.

Between 1905 and 1914 subscriptions paid by miners increased, as did the number of patients admitted to the home. By 1915 the DMA were considering plans for the building of a new convalescent home in Skegness. In January 1916 the DMA’s Council granted a loan to the Convalescent Home Committee for the purchase of land from Sir Charles Seely. Plans for a new building were prepared by the architect Percy Houfton, who had previously been responsible for designing the Creswell Model Village development for the Bolsover Colliery Company, and a building fund was created. Construction of the home was delayed by the continuation of the First World War, disharmony within the industrial workforce in the immediate post-war period, and rising building costs.

The lease on the original grounds was due to expire in 1926; the site at Winthorpe Avenue on which the convalescent home would be built was acquired in 1925. Funds were drawn from the Miners’ Welfare Scheme, local branch committees, colliery owners and increased contributions from miner to help meet building costs. The new convalescent home was opened on 10 March 1928, providing accommodation for 120 men and 30 women.

In 1937 the DMA negotiated with the Ministry of Labour for the introduction of a Holiday Savings Scheme, which would enable miners in Derbyshire to take holidays without a loss of earnings. The scheme began in 1938 and one of its aims was the building of a holiday centre in Skegness. The Derbyshire Miners’ Welfare Holiday Centre was built on the grounds of the convalescent home with financial grants from the Miners’ Welfare Fund and colliery owners. It opened on 20 May 1939 and was the first of its kind in the United Kingdom, described by Sir Frederick Sykes, Chairman of the Miners’ Welfare Central Committee, as ‘a pioneer venture’. The holiday centre could accommodate almost 1,000 visitors per week in wooden chalets, and was available to approximately 40,000 miners (and their families) then employed in Derbyshire collieries. It provided accommodation, meals and entertainment, and was also used by miners in other regions.

The War, requisitioning and a fire

The convalescent home and holiday centre were requisitioned by the British government in September 1939 for use as a military hospital and was returned only in 1948. In May 1942 the DMA’s Executive Committee was instructed by the Council to establish a temporary convalescent home. In May 1943 the DMA acquired the Russell Hotel in Blackpool for use as a temporary convalescent home, and from July 1943 it became the Blackpool Convalescent Home. In October 1949 a fire destroyed the holiday centre’s central buildings, and a new dining hall, kitchens and concert hall were built.

A 2nd holiday home at Rhyl

A second holiday centre opened in North Wales in 1949. In 1947 the National Union of Mineworkers (NUM) Derbyshire Area, which had succeeded the DMA in 1945, negotiated with the National Coal Board (NCB) the lease of land formerly owned by the Bolsover Colliery Company. The Derbyshire Miners’ Welfare Holiday Centre was situated on Marsh Road in Rhyl. In 1949 the site was taken over by the Coal Industry Social Welfare Organisation (CISWO), and developed it using it the holiday centre in Skegness as a model. The NUM Derbyshire Area ran the holiday centre with CISWO on a rota system which changed each year.

Operations at both of the holiday centres and the convalescent home were overseen by a management committee and had a body of trustees. Before 1953 the convalescent home and holiday centre in Skegness were regulated by two separate Trust Instruments; in 1953 the Charity Commissioners established a scheme for the regulation of both. Day to day activities at the centres were the responsibility of a general manager.

Special rates for retired mineworkers and the disabled or permanently sick

The holiday centres were open each year between late March and early October, with four weeks reserved for retired mineworkers at special rates and nine weeks for the disabled or permanently sick.

In the 1950s a paraplegic block was opened at the holiday centre to accommodate permanently disabled or sick miners, and brick buildings replaced the wooden chalets. In 1956-57 the holiday centre provided temporary accommodation to refugees who had fled Hungary following the uprising in 1956.

Categories: News.
« Skeggy Miners Holiday Camp. “Can you see the Wind Mill yet”
REMEMBRANCE AND RESISTANCE – The Derbyshire Miners Convalescent and Holiday Home »