In this week’s Mining Blog, we are continuing our celebration of Berry Hill Park, Mansfield, and reveal in detail the financial contributions made by Nottinghamshire’s miners to the Park, through their hard and dangerous labour.  We also never forget, that Nottinghamshire miners families paid for the park through lost lives and life changing injuries and industrial diseases.

A November 1954 ‘Coal News’ details the first of 5 annual donations of £5,000 donation to developments at Berry Hill  Park by the Nottinghamshire NUM.  Nottinghamshire NUM, like all Unions, drew its funds from its members contributions. 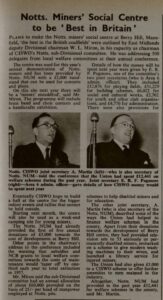 In addition, W L Miron, then the Chairman of the Notts Area Sub Division of CISWO, outlined the NCB allocation to CISWO which was made on the basis of 25 shillings per head of manpower employed in Notts pits.  This amounted to £60,000 in 1954 alone.

We are also celebrating in this Mining Blog the fruitful outcome of this financial contribution made by Nottinghamshire miners to the health, well being, fitness and sporting achievements of miners’ children, their families and the wider community at Berry Hill and other Parks supported by CISWO.

Mansfield Harriers Athletics Club was first established in 1920, but in1958 it changed its name to the Berry Hill Mansfield Athletics Club after the creation of the new athletics track, funded by Nottinghamshire’s coalminers. This enabled the Club to support and develop the athletic fitness and prowess of many local people.

Today we would like to feature the achievements of Mansfield’s Olympic runner, John Whetton.  John was a coalminer’s son.  We do not know whether John was a member of Berry Hill Mansfield Athletics Club, but in 1968 when he competed in the Mexico Olympic Games, he trained at Berry Hill, as can be seen from this film, free on BFI Player, based on a report in  the Mining Review 22nd Year.  Watch Mining Review 22nd Year No. 1 online – BFI Player 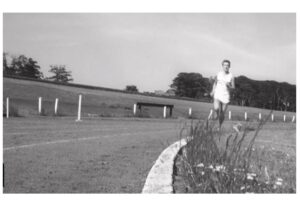 Categories: News.
« “This Union awareness, was the language of the home, the chapel, the pub and the street corner.
A HISTORY OF PIT HEAD BATHS AND THE FIGHT AGAINST COAL DIRT »