A Personal Recollection by Colin Clews

A personal recollection by Colin Clews, a member of the LGBT+ community in Notts describing his experiences growing up as a as a gay man in a mining village in County Durham in the 1950s and 1960s and his feelings of loyalty to the mining community at the time of the 1984/1985 strike that resulted in him working as a typist in the Strike Centre in Nottingham.

“They had needed a typist and I’d volunteered. It took them a while to get their heads around a man doing what they obviously saw as a woman’s job, but we eventually got there!”

I grew up in a mining village in County Durham in the 50s and 60s: a time when attitudes to LGBT+ people ranged from negative to brutally hostile. Such entrenched homophobia pushed me into denial; I really believed my lack of girlfriends was down to ‘not having found the right woman’. It wasn’t until I went away to university that I quickly discovered that ‘the right woman’ was actually a man!

It pushed me into a different world and I left my roots behind – or so I thought. When the miner’s strike came along in 1984 there was never any doubt where my loyalties lay. I remembered the hardships that strikes involved – to individual families and whole communities. And I also despised Margaret Thatcher asa cold-hearted bully who had no concern for working-class communities.

I was living in Nottingham when the strike began and it quickly became the focus of national attention as Nottinghamshire miners chose not to strike. Thatcher threw massive resources into keeping the pits open. The NUM, in turn, threw their resources into trying to close them down, sending pickets in from around the country. Nottinghamshire became a police state. Illegal policeroadblocks were set up between towns and motorists where stopped, questioned about their intentions – and even their political loyalties – and frequently subjected to car searches. And I’ll never forget the sight of a huge convoy of police vehicles driving down Mansfield Road late one night. It felt like we were under occupation by a hostile army.

And so I began working at the Strike Centre on Mansfield Road. They had needed a typist and I’d volunteered. It took them a while to get their heads around a man doing what they obviously saw as a woman’s job, but we eventually got there! And as I sat at my typewriter day after day I watched full collection buckets coming in to be emptied and pickets arriving to be despatched to pits.

In September 84 I moved to London and joined Lesbians and Gays Support the Miners almost immediately. My activities were largely collecting in gay pubs and outside Gay’s the Word bookshop on Saturdays. The latter usually involved some level of encounter with the police. They would insist that we weren’t allowed to collect outside the shop; we – backed up by the shop manager –would insist that we were. But this inevitably led to threats to ‘take us down to the station’ (and, by inference, charge us with some trumped up offence) if we didn’t stop. And so we stopped – by going into the bookshop until they’d gone away. Then we came back out again and carried on collecting. This cat-and- mouse game became a regular part of our experience.

As the 2014 film ‘Pride’ showed, a number of LGSM members went up to visit striking miners and their families in the Dulais valley in South Wales. And the bonds between LGSM and the mining communities became incredibly strong. They repaid our financial support many times over with their continuing support for our communities. The film ‘Pride’ notes how the NUM were instrumental in getting LGBT+ rights into the Labour Party manifesto, but it didn’t stop there. For example, they were also very active in the campaign against Section 28. And, perhaps of even greater importance, NUM support allowed gay miners to come out and has made it so much easier for the LGBT children and grandchildren of miners to come out. The strike may be over, but the legacy of the bond between mining communities and LGBT+ continues. 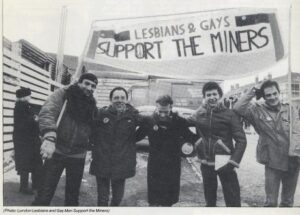 Thank you Colin, for sharing this account with us and for sending over this fantastic photograph. It is great to have insight from a member of LGSM, to contribute a lived experience. Thank you for your support of the museum. We hope you have enjoyed this month’s theme.

GALA MEMORIES – EXCITING DAYS TO PLAN FOR AND REMEMBER

“The Notts NUM Miners’ Galas were days to look f...

“It was the most important event of the local calendar...

1954 CISWO PLANS FOR A MINERS’ EISTEDDFOD’

NOTTS MINERS’ SOCIAL CENTRE TO BE ‘BEST IN BRITAIN’ In this...

POSTPONEMENT OF THE RE-OPENING OF THE NOTTINGHAMSHIRE MINING MUSEUM

We should like to thank everyone who has expressed a wish to...

FUN OF THE FAIR