This text and the photographs are taken from the online source The historic roots and modern connotations of “Canary in the Coal Mine” (gale.com)

│By Amelie Bonney, Gale Ambassador at the University of Oxford│

Most of us see bright-feathered, warbling canaries as pets, yet these tiny birds were not always just household companions. In the nineteenth century they were used as exceptional risk predictors in mines. This was because they were particularly sensitive to carbon monoxide, a substance which led to numerous mining accidents in the aftermath of industrialisation. Thus, oddly, an increasing reliance on fossil fuels induced a new rapport with nature and animals. The canary’s role in mines became so engrained in the English language that “a canary in the coalmine” is now a well-known phrase, used to refer to early indicators of potential hazards.

In the nineteenth century, coal mining developed into a vital industry, as steam engines and railways became increasingly widespread. Whilst new technologies allowed deeper and deeper mines, miners were exposed to increasingly dangerous working environments and often fell victim to explosions and poisonous gases. Carbon monoxide is a particularly deadly gas as it is not only odourless and colourless, it’s lighter than air and highly flammable. It can also quickly build up in the body, which made it essential to find ways to swiftly detect its presence in the air. It was soon discovered that a canary would immediately show signs of distress in the presence of carbon monoxide and die well before a human would begin to feel the effects of carbon monoxide poisoning, thus they came to play a crucial role in detecting these toxic gases and managing hazards in the mine.

The practice began in the last decades of the nineteenth century. In 1906, canaries were used by a rescue team to enter a mine in the aftermath of an explosion (see below). The canary was described as most useful and in some instances they were produced as evidence during investigations of industrial accidents. By 1911, regulations insisted that miners should “use ‘two small caged birds’ each time they went down a mine”.

This report is from the Nottingham Evening Post dated 21st December 1906. 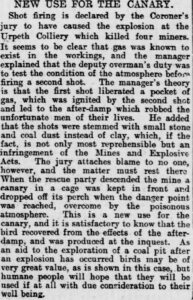 By 1926, the canary had become a typical attribute of the rescue teams that went into mines in the aftermath of accidents, as can be seen on drawings that were created during a nine-day nationwide general strike of coalminers in the UK in 1926. 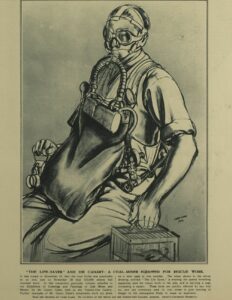 The Life Saver and his Canary, The Illustrated London News, 4 December 1926

However, in the same year, Dugald Macintyre argued that it was deplorable to use the birds for this task, and considered it a failure of science that no tool had yet been invented to spare the animals from being taken into the mine pits. Macintyre did acknowledge, however, that canaries proved essential to save lives during the Scotswood Colliery disaster in Northumberland in 1925, and insisted that the birds were “uniformly well cared for”.

While these tales of canaries in mines might seem to belong to a distant past, canaries were actually used in mines as late as 1996 when British legislation officially ordered miners to replace canaries with electronic carbon monoxide sensors. Miners themselves however regretted the loss of their canaries, as reported in this article in the Daily Mail Historical Archive: 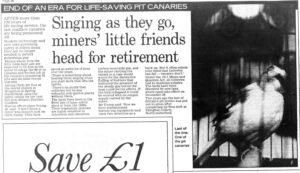