THE ORIGINS OF OUR CAMPAIGN

The Association has recently written to our Nottinghamshire Labour MPs to ask them to support a campaign, begun in the Yorkshire Area, to gain recognition for those mineworkers who were required to continue their work as miners, in support of the war effort in the two world wars and who lost their lives as a consequence of the dangerous work they undertook.

We have reminded our Labour MPs of the Memorial to the Bevin Boys which was recently unveiled at The National Memorial Arboretum at Alrewas, Staffordshire and that like the Bevin Boys, mineworkers were required to serve their country in the dangerous and vital work of keeping coal supplies flowing during the war. They were denied the opportunity to fight for their country and many of them felt this deeply. Some tried to join up and were denied the opportunity. At least one young surface worker at Newstead Colliery who applied to join the Navy was imprisoned and on his release was required to begin work as a collier. There will be others we do not know about.

In support of this campaign we have decided to re-print this article by Brian Walker which tells the story of Sid Page, the Newstead lad who wanted to join the Navy, who was sacked, sent to prison and whose struggle for the right to join up placed him at the centre of a strike which brought the Nottinghamshire coalfield to a standstill.

Whilst Sid Page thankfully survived the war, his experiences highlight the “patriotic” pressures that men in reserved occupations faced. Brian’s article places our campaign in its historical context. 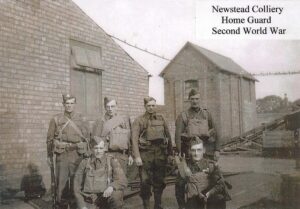 A page in the history of Newstead Pit

by Brian Walker, NUM Branch Secretary, Newstead 1972 – 1985
Extracts from an article published by Roy Peters in the Ashfield Historian in 1996

The history of the Nottinghamshire Coal Mining Industry in the period leading up to the Second World War and beyond was dictated by the various coal export demands from Europe, with France being the main market for British coal. The outbreak of the war and the consequent loss of the French market, plus that of the remaining European countries, caused a position of relative over production. It was for this reason that the manpower of the industry was allowed to fall, many miners enrolling in the armed services.

During the period from July 1939 to July 1941, a total of 80,000 miners nationally joined the forces. This was on top of 7,000 who had left the industry up to May 1941 to work in other industries. This was not just a loss of men; it was also a major adverse effect on the average age. It soon became obvious that a serious manpower crisis was looming. By mid 1941 coal shortages were being experienced, something would have to be done. The National coal production figures are very revealing:

The continuous fall in output was very serious indeed.

The control of the mines was taken from the owners and put into the hands of the Churchill’s Wartime Government via Regional Controllers, and a National Coal Board. In the case of Nottingham it was a Mr. Evershead. The government’s action came in 1941 with the Essential Works Order (Mining). This order put a restriction of movement on all miners, it ordered the compulsory registration of all ex-mineworkers and it also drafted back into the mines all those fit enough to work there. The E.W.O. also had set up various disciplinary measures including attendance committees, which included workmen’s representatives along with the use of the courts. It must be said that the Notts Coalfield was fairly stable with its manpower and despite the difficulties settled at some 41,000 men, with an output rising from about 13 million tons in 1939, to some 15 million tons in 1943, whilst the National output was falling.

The Situation Faced by the Young Miners was Very Difficult

There was an underlying dissatisfaction with the position of the younger miners. On entering the industry a sizeable proportion were given jobs on the colliery surface, and it was these jobs that were seen as being outside the E.W.O. The lads so employed saw an opportunity to get out of the pits and join up in either the navy, the army or the air force. After all, the very emphatic advertising campaign told them that the place to be was in the armed forces, so much so that anyone not in them was judged to be hiding behind the status of ‘in a reserved occupation’.

Newstead Colliery had employed a group of about sixteen young hopefuls intent on joining the forces. To do this they had to avoid going down the mine and therefore had to remain as long as was possible in a surface job. Of course the colliery management thought otherwise and set about forcing the lads underground into jobs where their employment was controlled by the wartime laws. It was generally felt by those familiar with events that the lads had much merit in their plan to keep out of the pit. Not however the courts and the Regional Controller.

Persuasion by one means or another, including sacking them, forced them to comply.

The Courageous Stand of Sid Page

One by one the young miners succumbed to the impossibility of their case until it came to one lad who would not accept the order, “get thee down t’pit where you belong”. His name is Sid Page. He insisted that he be allowed to go into the Royal Navy. So he firmly stood his ground, and he had many supporters amongst the miners of Newstead.

Of course the authorities had a field day, ‘what a young upstart on the surface at Newstead won’t go down the pit, well he shall be forced to’ and so the wheels of makem started to roll. He was given the sack. Three months went by and to the Courts they went. The Court’s judgement went against Sid and a sentence of Thirty Days in Lincoln Prison was given.

The passing of this sentence on him brought uproar in the courtroom. The Newstead Miners’ Union Delegate, Bill Askew, shouted out in protest at the harsh verdict, a verdict which surprised even the employers and must have filled them with a foreboding of what was to follow. Sid, it must be said was a very popular lad with many friends, they reacted immediately and stopped work on Monday 13th September 1943. Newstead Colliery found itself on strike, with Sid Page now under lock and key and out of harm’s way so to say.

How the Dispute was Resolved

The world outside Lincoln Prison was embroiled in a labour dispute which by now had brought the whole of the Nottingham coalfield to a standstill, with the real prospect of the issue becoming an unprecedented national strike and in wartime too. The Courts could not of course solve the problem. Meetings were convened with the two sides in dispute and it was immediately agreed the use of the Courts would not be sought and that Sid Page would be seen in the prison by Joe Birkin, the Union’s Vice President and Anthony Jackson, the Newstead Colliery Manager.

There then followed a deputation of Bill Askew and four workmen who met Mr Evershead and they put certain demands forward. These were that no further prosecutions be made, that there be no direction of surface workers and this be made clear in the E.W.O. Act by treating them equally with other young men outside coal mining when reaching the call-up age. The demand made that Sid be pardoned had already been met as the Home Secretary, Herbert Morrison, had signed an order for this to be done.

To his credit, Sid, by now a young man with his world shattered, abided with the advice and pleas made to him. He agreed that as it was his lot in life, like those millions before him, he would go to work down Newstead Colliery becoming a coalface worker. He abandoned his hopes of becoming a sailor. It was never his intention to cause such a fuss and he was greatly embarrassed by it all.

A mass meeting of striking miners was held in Hucknall which passed the following resolution: “We resolve that as the Strike Committee conducting the dispute in the Nottinghamshire coalfield, having been assured that Page is released, and further being of the opinion that outstanding cases are not likely to be brought into the Court, pending the Government considering the points brought forward by the Strike Committee and convened by Mr Evershead, are prepared to recommend a return to work having been given a guarantee against any victimisation.

It was now clear that something had to be done about manning the pits, reducing the average age of mineworkers and increasing coal production. The solution was found, but little or no credit has been given to the miners who brought it about at the time. It became known as the Bevin Boy Scheme. Included in the conscription – the “call-up” was work in the coalmines. The expectancy was that 50,000, a quarter of all those eligible for conscription would be made available for work in coal mining. In the event in the year 1944, there were just 15,000. The following year there were a mere 5,900. It was clear that Pit Work was not very attractive.

The Criticisms Miners Had to Face Without a “War Work” Badge

It must be said that coal miners experienced some criticisms, particularly from families who had their loved ones far away from home for long periods and who faced the uncertainty of their survival. It was common for the question of “why aren’t you in the forces” to be asked. Railwaymen and munition workers each sported an official badge identifying them as essential war workers. Miners were never given this opportunity to wear such a badge and so were left to make their own explanations for not being away in one of the armed services.”

THE NEXT STEPS IN OUR ASSOCIATION’S CAMPAIGN

The Association hopes to begin research into the names and circumstances of all those mineworkers who died in the two world wars, and we would ask our members to assist us in this task. If you have any information that you think could help us, please forward it to us here at the office.
Ann Donlan

The campaign was successful and you can find more details here